Digital-music buyer, don't be a fool

(CNN) -- Back in my day (a day not long ago, as it turns out), you could go down to the local record shop and plunk down your paper-route money for little disks of plastic that were embedded with the latest sounds of your favorite musical performers. 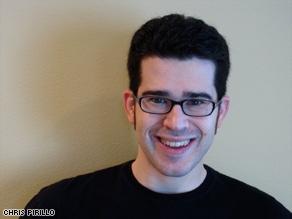 Whether your tastes ran from Al Jarreau to "Weird Al" Yankovic, you could be assured that those purchased disks were yours -- for keeps.

You could play 'em over and over until they were scratched beyond repair, you could lend 'em to friends, you could amplify 'em at illicit Charleston dancing parties, you could sell 'em to used record stores or you could store 'em away in a safe deposit box in hopes they'd gain value as collector's items.

You could even make precious mix tapes for your soda-sharing sweetheart with songs copied from 'em, though this made recording industry executives more than a little nervous. And it wasn't long before their weaselly whimpers of protest began.

As the digital age arrived to usher in more perfect ways to copy and distribute (aka "pirate") what these executives saw as their property, those whimpers turned to howls. They've only grown louder since.

So the recording industry has had a good gig going. It's easy to see why its upper crust is miffed at lowly hoi polloi tampering with its bread and butter (or pizza. Or pie. Whatever crust suits your fancy).

One can imagine some mad scientist under the employ of said recording industry locked away in an underground bunker somewhere cooking up a scheme so dark, so evil, that its repercussions would completely remap the way media would be controlled -- with consumers being suckered into paying much, much more for much, much less.

This scheme would come to be known as DRM. Digital rights management or devious rental misappropriation? That's right. Rental. You see, you don't really buy music for keeps anymore. I mean, how can you when this is the sort of thing that can happen?

It's a bit like buying your dream car, driving it around for a while, then being told it's got to be given back to the factory because the dealership where it was purchased no longer has a legal association with the factory.

Being used to the old, tangible business model, you were under the impression that you'd actually bought something. No one told you that you were merely borrowing someone else's property for a while (and paying for the privilege to do so). Like a sharecropper. Like a serf. Like a sucker.

And most people do feel like suckers when DRM locks them out of something that they feel they have every right to use, often to the point of attempting to circumnavigate this crappy, unfair system by means that might lead to trouble.

I can only conclude that, like bootleggers at the repealing of Prohibition, viruses and spyware acquired in pursuit of overcoming content restrictions wouldn't prosper in a DRM-free world. Really, it's hard to take alarm from DRM-happy organizations such as the MPAA as anything but a double dose of dookie when you find out that 2007 was a record box office year in spite of all the pirates and ne'er-do-wells and whatnot!

Who, exactly, is getting plundered? It's no wonder blogger Cory Doctorow finds DRM to be one of the most offensive digital constructs on the planet. It's inevitable. It'll go away or change dramatically. Let's hope sooner rather than later.

(This column was written before Apple announced that iTunes would be, at some point in the future, capable of providing DRM-free music throughout its entire library. This was pretty big news, considering how many people use iTunes to manage their music library. This isn't to say that the DRM-free tracks available at Amazon or eMusic are any less valid, but let's face it: just about everybody who carries an iPod or iPhone also uses iTunes as the gateway for purchasing music.)

I subscribe to Rhapsody, so I can listen to just about anything from my desktop, and subscriptions are my preferred method of content consumption. I have an XM satellite radio subscription, I pay for just about every channel on digital cable and I have been known to purchase hard copies of content in the past (DVDs, CDs, 8-track tapes, etc.)

But DRM? It's no good. It's downright evil. I find it very difficult to purchase something outright when I'm told that I can only play it X times, only on X devices or for X long. That's counter-intuitive and consumer unfriendly. There are certainly exceptions to the rule, but not when the content is a commodity.

I once found four different versions of the same song on my wife's system. One had been purchased on Rhapsody, another on iTunes, another on Napster and the fourth was an MP3! Quadruple madness! I don't care how good a song is, she doesn't need to have four copies of it (three of which are completely useless without the proper systems in place).

The MP3? It's as perfect as it needs to be, playable on just about anything these days. That's consumer friendly.