(CNN) -- Without his input, Bryan Rutberg's Facebook status update -- the way friends track each other -- suddenly changed on January 21 to this frightening alert: 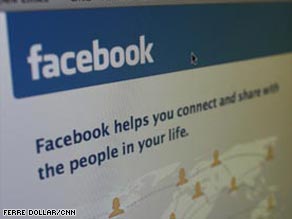 Fears of impostors are increasing as Facebook's membership grows.

His online friends saw the message and came to his aid. Some posted concerned messages on his public profile -- "What's happening????? What do you need?" one wrote. Another friend, Beny Rubinstein, got a direct message saying Rutberg had been robbed at gunpoint in London and needed money to get back to the United States.

So, trying to be a good friend, Rubinstein wired $1,143 to London in two installments, according to police in Bellevue, Washington.

Meanwhile, Rutberg was safe at home in Seattle.

Rubinstein told CNN he misses the money, but it's perhaps more upsetting to feel tricked by someone who impersonated his friend on Facebook, a social-networking site where millions of friends converse freely online.

"It's an invasion of your whole privacy, who your friends are," he said.

Watch Rutberg talk about his Facebook page being hacked »

While reports of extortion and false impersonation have been common in phony phone calls and fake e-mails, similar fraud hasn't been reported on Facebook until recently. Now a number of complaints are surfacing.

In response to the trend, the Better Business Bureau in late January issued a warning on its Web site, intended for Facebook's 150 million users: know who your friends are and keep your sensitive information private.

In the Seattle case, a hacker appeared to steal Rutberg's identity to get money from his friends by toying with their emotions.

In Wisconsin, police accuse an 18-year-old man of posing as a woman on Facebook to get high school boys to send him naked photos of themselves.

Anthony Stancl, of New Berlin, Wisconsin, allegedly used the naked photos he had solicited to force the young men into sex acts with him, according to a criminal complaint.

Stancl was arrested on 12 felony complaints, including sexual assault of a child younger than 16 and possession of child pornography, the complaint says.

CNN left multiple messages for Stancl's attorney but did not receive a response.

Stancl is being held in lieu of $250,000 bail and has no previous criminal record, according to CNN affiliate WISN.

There are primarily two ways to stay safe on Facebook, said Jim Lewis, director of the technology and policy program at the Center for Strategic and International Studies. First, make sure your computer anti-virus programs are up to date; and tell online companies you want better privacy protection, he said.

In a statement, Facebook spokesman Barry Schnitt told CNN that impersonation schemes affect fewer than 1 percent of Facebook's 150 million users. He would not comment on whether the rate of such incidents is increasing, but said any increase in the total number of impersonations could be due to the fact that the site is growing by 600,000 users per day.

"In many cases, the scammer has added a new contact e-mail to attempt to maintain control of the account," Schnitt said in a prepared statement. "To combat this, we're instituting changes that will better notify users when their account is modified and empowering them to reverse these changes."

Rutberg, the Seattle man who had his Facebook page hacked, said he worked with the site to shut down his profile within a day. It was back up in a week, he said.

All Internet users should be aware their identities can be compromised, and "every user of the Web should be better educated," Rutberg said.

Like other types of Internet fraud, Facebook impersonation cases are difficult to solve and costly to pursue, said Officer Greg Grannis, spokesman for the Bellevue Police Department in Washington.

"We are not investigating this case," he said, noting that a report on the case had been filed with his office. "It is pretty much at a dead end."

Because the money went to London, it would be nearly impossible to send officers out to investigate the case, he said.

Facebook says it is taking measures to reduce impersonations. The popular site also offers these preventative tips for those who want to take the security of their online profile into their own hands:

• Be suspicious of anyone -- even friends -- who ask for money over the Internet. Verify their circumstances independently, either by calling them directly, or checking with mutual friends.

• Choose a strong password and use unique credentials for each of your Web accounts. Facebook says hackers tap into one site and then try to reuse passwords on others.

• Use an up-to-date browser that features an anti-phishing blacklist.

• Use and run anti-virus software on your computer.

• Have more than one contact e-mail address. This will help if one of them is hacked.