CHICAGO, Illinois (CNN) -- The beautiful singer was about 30 years old when the world forgot about her. But now we know what she looks like for the first time in nearly 3,000 years. 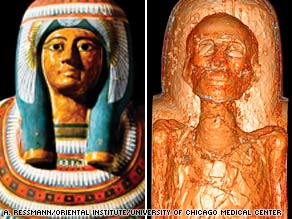 The mummy known as Meresamun was entombed nearly 3,000 years ago.

It's all thanks to one of the most sophisticated CT scanners in the world. Without even cracking open the Egyptian casket, you can now see the smallest details of the woman's features. Her skin, muscles and bones are intact.

"Her eyes are set far apart, and she has a very full mouth and high cheek bones. You know, I think I could recognize this individual if I saw her in life," said Michael Vannier, a radiologist at the University of Chicago Medical Center.

Egyptologist Emily Teeter recruited Vannier to help her get a look at the mummy no one had seen. Teeter is a researcher at the Oriental Institute, a small museum on the University of Chicago campus where the mysterious mummy was first brought in 1920.

See animation of the mummy unveiled »

Researchers had long wanted to know more about the looks of the mummy locked in the coffin. But opening the coffin was not an option.

"It's impossible to open it without destroying it," Teeter said.

"A major concern of archeology is preserving evidence intact, and so CT technology is ideal for studying a coffin and mummy like Meresamun," she said. "It's so astounding with the advances of CT technology -- that with this newest generation of scanner, we can learn so much more about her life, her health and the way she was mummified."

Teeter had looked at the mummy's coffin nearly every day over the past 19 years. Through this project, she said, she now looks at the mummy "as an individual instead of just an artifact."

Today, the mummy is the museum's star, the highlight of a new exhibit. She's undergone a high-tech unwrapping in breathtaking detail on film clips produced by Vannier, using a CT scanner normally used for patients who are still alive.

"The first patient we scanned was this mummy," Vannier said.

He's taken about 100,000 images. The images border the beautiful and the creepy: an up-close look at someone who died hundreds of years ago. CT scans have been used on mummies before, but they rarely generated such an amazing set of data, Vannier said.

"Many of the mummies had been taken out of their casket for scanning. In this particular case, this casket's never been opened," he said. "So everything we're seeing there has never been seen before -- at least not in 2,800 years."

The mummy was discovered in Luxor, Egypt, and sold to the Oriental Institute in 1920.

Teeter said the coffin, painted and carved to look like the figure of a beautiful woman, is an archeological marvel. She said singers who served in Egyptian temples were traditionally young, beautiful women from high-ranking families.

Hieroglyphs on the front of the coffin tell researchers more about the mummy's life. The woman's name was Meresamun, which means "Amun Loves Her," and she was a singer in the temple of the Egyptian god Amun.

Teeter also said the Oriental Institute's exhibit highlights the fact that Meresamun was not just another pretty face.

"She was a working woman. She had her job at the temple, and she'd come home," she said.

Teeter believes that Meresamun would be pleased that modern medical science has given her new fame.

"One of the ideas in ancient Egypt is to live forever and be remembered by people. She has her wish," Teeter said.

The only thing that remains a mystery is how she died. Vannier said there are no signs of trauma to the body, and his only theory is that she died of some kind of infectious disease.

He's most surprised by how perfect her teeth are, suggesting that she didn't follow our modern-day high-sugar diet. She didn't have a single cavity.

"I think the thing that we learned that was very surprising, at least to me, was the fact that our dental disease is obviously related to our diet," he said. "She obviously had no refined sugars. A lot of the things that they ate were grain and more fresh materials."

He said what they've learned is astonishing. "We had some expectations, but they've all been so far exceeded. We're really not sure where the limit of all of this is."

CNN's Wayne Drash and Kyle Almond contributed to this report.

All About Science and Technology • Egypt