(CNN) -- Under fire from tens of thousands of users, the social networking site Facebook said early Wednesday it is reverting to its old policy on user information -- for now. 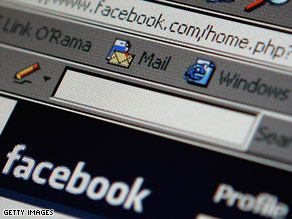 The site posted a brief message on users' home pages that said it was returning to its previous "Terms of Use" policy "while we resolve the issues that people have raised."

The "Terms of Use" is the legalese tacked on to the bottom of most Web sites that details what the site's owners can do with the information that users provide.

Facebook, the Web's most popular social networking site, has been caught in a content-rights battle after revealing earlier this month that it was granting itself permanent rights to users' photos, wall posts and other information even after a user closed an account.

The popular site allows users to create personal profiles where they can then connect with one another, upload photos and share links. The site boasts more than 150 million active users.

Member backlash against Facebook began over the weekend after a consumer advocate Web site, The Consumerist, flagged a change made to Facebook's policy earlier in the month.

The company deleted a sentence from the old Terms of Use. That sentence said Facebook could not claim any rights to original content that a user uploaded once the user closed his or her account.

In response, Chris Walters wrote in the Consumerist post, "Make sure you never upload anything you don't feel comfortable giving away forever, because it's Facebook's now."

Thousands of indignant members either canceled their accounts or created online petitions. Among them were more than 64,000 who joined a group called "The People Against the new Terms of Service." iReport.com: Too much information posted online?

On Monday, Facebook Chief Executive Mark Zuckerberg tried to quell the controversy by saying the company's philosophy is that "people own their information and control who they share it with."

But members were not appeased because the site did not fix its Terms of Use. The company, in its post Wednesday, said it was returning to its previous Terms of Use because of the "feedback" it had received.

"As Mark expressed in his blog post on Monday, it was never our intention to confuse people or make them uneasy about sharing on Facebook," company spokesman Barry Schnitt said in a blog post. "I also want to be very clear that Facebook does not, nor have we ever, claimed ownership over people's content. Your content belongs to you." iReport.com: Your thoughts on Facebook's about-face

Schnitt said the company is in the process of rewording its Terms of Use in "simple language that defines Facebook's rights much more specifically."

And Shahrzad Grami of St. Paul, Minnesota, added: " YAYYYYYYYYYYY!!!!! nice job guys! i won't be canceling my account after all."