(CNET) -- Well, here's what we've all been waiting for. Apple put out a couple of announcements on Tuesday related to its desktop computers. 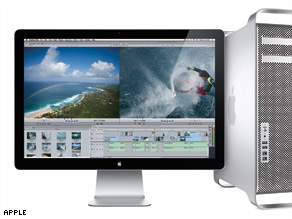 The company unveiled a new Mac Pro high-end desktop powered by Intel's "Nehalem" processor, a new and more graphics-intensive Mac Mini machine, and updated iMacs that include the lowest price point yet for the consumer desktops.

Let's look at the new Mac Pro first: priced at $2,499 for the quad-core version and $3,299 for the eight-core version, those Intel "Nehalem" Xeon processors run at 2.93 GHz, and the interior of the machine has been cleaned up to make physical expansions easier. On the green front, it meets the new Energy Star 5.0 requirements that will go into effect later this year.

"Our flagship 24-inch iMac with twice the memory and twice the storage is now available for just $1,499," Apple chief operating officer Tim Cook, currently standing in at the helm of the company in place of iconic CEO Steve Jobs, said in a release.

"The Mac mini is not only our most affordable Mac, it's also the world's most energy efficient desktop computer."

As for the new Mac Mini, the big upgrade is NVIDIA GeForce 9400M integrated graphics that Apple says will improve its graphics performance as much as fivefold.

All these machines, like the new Mac Pro, meet Energy Star 5.0 requirements.