(CNET) -- A 15-year-old has created a free-music service by harnessing YouTube's vast library of music videos. 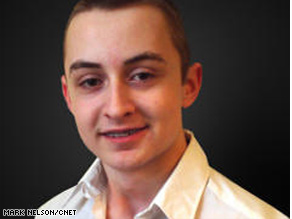 Muziic, created by teen developer David Nelson, has built an iTunes-like interface on top of YouTube. The service enables users to stream YouTube's music to their PCs without fiddling with videos. Users can build playlists and organize songs in a way similar to iTunes.

CNET blogger Matt Rosoff first wrote about the service and gave it a favorable review. "Any song that's been uploaded to YouTube is available in Muziic," Rosoff wrote. "This includes music unavailable on most commercial services, like the full Pink Floyd performance at Live 8 and Led Zeppelin's one-off performance in 2007."

I downloaded Muziic and this is a slick piece of software. Streamlining YouTube's music experience is an idea that I suspect a lot of people have considered, and one that Universal Music Group appears to be pursing. Last week, CNET reported that the largest of the top four recording companies, is negotiating to create a premium music-video site in partnership with YouTube.

So, the Nelsons are to be congratulated for coming up with a great idea and developing a very cool service.

But here comes the cold water: this site has yet to receive the blessing of Google, the large recording companies or the scores of film and TV rights holders who filmed the many live performances on YouTube. I doubt these companies will welcome a service that makes it easy for users to avoid YouTube ads. They certainly won't allow the Nelsons to profit without at least receiving compensation.

"This is the first we've become aware of the site," a YouTube spokesman told CNET on Saturday night. "We're looking into it now. On a preliminary review, however, it appears that the site violates our API terms of use."

Representatives from Universal and Sony were not immediately available Sunday to comment, and EMI declined to comment. Warner Music's library was removed from YouTube after the two sides failed to renegotiate a new licensing deal.

I spoke with Mark Nelson, David's father, on Sunday morning. He said that they tried to contact YouTube when the site launched on February 25, but YouTube executives never responded. Mark also said he hasn't spoken to the big music companies or other rights holders.

Mark, a machine worker for Alcoa, said he and David worked hard to ensure that the site complied with YouTube's API. For example, YouTube requires videos play in any new app. So, the Nelsons inserted a tiny player in the interface. Will that satisfy YouTube? We'll have to wait and see.

I hope for Mark and David's sake there's a happy ending to their story.

Other companies, a number too long to list here, have developed nifty music services only to see them fail when they couldn't come to an agreement with the labels. The most famous was also developed by a teenager. If you listen to some in the music business, that site almost destroyed the industry.

The developer was Shawn Fanning and the site was Napster.

The good news is that the labels are much more willing than in the past to work with technologists. Often the solution is that the big recording companies will take an ownership stake in the start-up, like they did with MySpace Music.

"We have an open door policy to the labels," Mark Nelson said. "We would love to talk to the labels. We've worked long and hard on this. We would hate to see YouTube or the labels shut us down."

Note: The video clip above, James Brown playing the Letterman show in 1982, is an example of hard-to-find performances that YouTube--and now Muziic--have in abundance.