(CNN) -- It's Sunday night during TNT's coverage of the NBA playoffs, and announcer Kenny Smith, aka "The Jet," is doing push-ups. 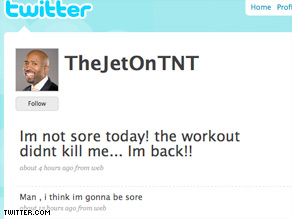 "Hawks look hot! CWebb, my boy Fabian and I doing 30- pushups P90X style every commercial.. getting summeer [sic] ready," writes Smith to his followers on Twitter, the microblogging site where you can "tweet" brief messages of up to 140 characters.

Five hours later, Smith (@TheJetOnTNT) tweets a follow-up: "Man, i think im gonna be sore." By Monday morning, though, he seems raring to go again: "Im not sore today! the workout didnt kill me... Im back!!"

"Sports personalities are tweeting now. They are giving fans a reason to tune in to see their comments," says Adam Ostrow, managing editor of Mashable, a blog devoted to online social media.

Ostrow believes social networking sites like Twitter allow athletes to connect directly with fans without the filter of the traditional media. And while many athletes and teams have blogs and Facebook profiles, Twitter allows for a more personal connection between fan and sports, he says.

NBA All-Star Shaquille O'Neal (@THE_REAL_SHAQ) is both a prolific scorer and a prolific twitterer. His more than 700,000 followers get his tweets about everything from his diet to his recent trip to Graceland.

Hockey players also are getting into the act. Washington Capitals ace Alex Ovechkin (@ovi8) was on Twitter during the NHL All-Star game in January, tweeting about the festivities and responding to fan questions and comments.

One athlete, Milwaukee Bucks forward Charlie Villanueva (@CV31), even got into hot water after tweeting during halftime of a game last month. Villanueva's entry read: "In da locker room, snuck to post my twitt. We're playing the Celtics, tie ball game at da half. Coach wants more toughness. I gotta step up."

He did. Villanueva finished with a team-high 19 points, and the Bucks won.

Fox play-by-play announcer Joe Buck, one of the network's wittier twitterers, shared this recent tender moment from the broadcast booth: "Joe Buck: Cold in the booth in STL. Tim [McCarver] and I are bundled up. And snuggling. Hard to type. I think hypothermia is starting to set in!"

TNT is using the same approach to connect with basketball fans during the current NBA playoffs. Eleven members of the network's broadcast team have joined Twitter to provide insight into games, offer nuggets from players and solicit fan opinions.

"TNT is an interesting experiment if they add analysis they don't give on TV," said Ostrow of Mashable. "More interesting if they give more non-basketball info."

And they are. When Kenny Smith started on Twitter, he wasn't really sure what it was or how it would work. So he just answered the default question on his page: What are you doing?

"I want to have some fun with it," Smith told CNN. "I love scavenger hunts. I might leave tickets to the conference finals somewhere and leave clues on my Twitter."

"You can give an attitude [on Twitter]," he said. "They can hear you on the air, but [on Twitter, they] get to hear your voice."

Smith hopes to continue revealing "behind-the-scenes" details in his tweets, because he wants his more than 1,000 followers to feel like they are there. And he plans to continue twittering beyond the NBA playoffs.

Increasingly, sports fans use social networking to talk back. For the Stanley Cup playoffs, the NHL recently organized "tweetups" where Twitter users met face-to-face to talk about whatever brought them together. Events were organized in 21 cities in the United States and Canada.

Laura Astorian, a self-described hockey blogger who follows the St. Louis Blues and Atlanta Thrashers, helped organize an NHL tweetup in Atlanta, Georgia. She said even though the city's hockey-fan base is relatively small, the fans rely on each other and use social networking sites like Twitter to communicate.

"The people who did come enjoyed the chance to sit down and talk hockey with like-minded people," Astorian said. "We did have fun, and there was mention of using the tweetup strategy for our draft party in July."