NEW BEDFORD, Massachusetts (CNN) -- When you think scooter, you might think of something a child would ride. 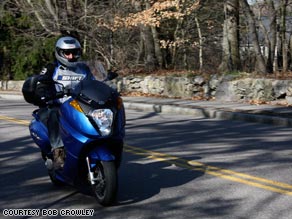 The Vectrix VX-1 maxi scooter, which weighs much more than a typical bike at 515 pounds, is anything but a kid's toy. It requires a motorcycle license to drive.

It's also electric, with a 180-pound battery that lets the rider forget about pumping gas. The Vectrix just needs an electrical outlet to get its fuel.

"I felt like I had an opportunity to sort of make a statement, just at the local level," Shapiro said.

"The cost of new technology is always higher than old technology," explains Mike Boyle, Vectrix's CEO. "You may win [people's] minds and hearts through the understanding of what an electric vehicle can bring to them. You then have to win their pocketbooks as well."

The Obama administration is helping do just that. Earlier this year, President Obama's stimulus plan proposed tax credits for those who buy plug-in electric vehicles. Depending on the size of the battery, the credit can reach up to $7,500.

Peter Hughes, Vectrix's chief technology officer, said the scooter was designed to suit the needs of a commuting executive.

"Think about the lawyer; think about the businessman, the banker, the engineer who doesn't want to take his car into the city. He has about a 20- to 40-mile round-trip commute."

The scooter can go about 50 to 60 miles when fully charged and it can reach speeds up to about 60 mph. It's billed as the only electric scooter on the market that's highway legal.

Watch the Vectrix and Tesla take to the roads »

"We classify this as a zero emissions vehicle. ... When you're riding it and driving it, it is zero [greenhouse gas] emission," Hughes said of its environmental impact.

"But we do account for the fact that when you plug it in, that energy comes from somewhere. You're going to take four kilowatt hours to charge this vehicle. The VX-1 has a carbon footprint of 36 grams per kilometer. Now equate that to a car, which is typically 10 times that."

But it's still a tough sell in the U.S. market.

"In America, I would say, No. 1, we're a four-wheel society. We're in love with the car, right? In Europe, out of necessity, everybody grows up on a two-wheel vehicle," Hughes said.

The company has sold almost 2,000 bikes since 2007. Electric scooters aren't new to the market. Several other companies, such as ZAP and e-max, sell models that aren't highway legal.

John Anthony, a bartender in Rhode Island, was the third person in the United States to buy a Vectrix. He read about it when it was a still a prototype.

"I wrote a check, and I sent it to them. Sight unseen," he recalled.

The independence from gas intrigued him.

"I try to use less gas and oil than most people," he said. "I heat my home with a wood pellet stove and I heat my hot water with solar panels."

Of course, going electric has its limitations.

"I did get stuck," he said. "It was right after I got it, and I said, 'I'm not letting my neighbors see me push this home.' It's not like running out of gas in a car, where somebody can bring you a gas can. You can't do that, so it's something that you really have to be careful of."

For those wary of changing their ways completely, the Tesla Roadster might offer a solution. This sports car can travel up to 244 miles between charges. But it also costs more than 10 times more than a Vectrix scooter.

"If you look at any new technology that enters the marketplace, for instance plasma TVs ... five years ago, it was a $10,000 luxury item. Now I could walk into a store and pick up something higher quality for 10 percent of that, for a thousand bucks," said Jeremy Snyder, Tesla Motors' general manager.

According to Snyder, the company hopes to "change the preconceived notion of society that efficiency needs to be boring."

A more affordable electric car may be available as soon as this year. Th!nk city sells electric cars in Europe, and plans to sell U.S. models for under $25,000.

While there is still a long way to go before gas stations become extinct, electric vehicle owners are always on the lookout for electrical outlets. And Vectrix owner Shapiro has a few other ideas.

"I had a dream when I bought it," Shapiro said. "I was going to go across country and make a documentary about going every 40 to 50 miles, and then knocking on people's door and saying, 'Do you mind if I sit on your couch for two hours while I plug in?'

"And it's still an idea I have in my head," he said. "Just waiting for a few offers from Hollywood."