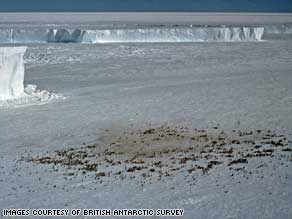 Satellites are locating penguin waste, which is easier to find than the penguins themselves

The penguins are difficult to pick up on sea ice, because of their natural camouflage that helps them blend into the shadows -- so the British Antarctic Survey had to come up with another method.

"We can't see actual penguins on the satellite maps because the resolution isn't good enough," said mapping expert Peter Fretwell. "But during the breeding season the birds stay at a colony for eight months. The ice gets pretty dirty and it's the guano stains that we can see."

The method helped scientists identify 38 penguin colonies -- of those, 10 were new. Of previously known colonies, six had re-located and six were not found.

"This is a very exciting development. Now we know exactly where the penguins are, the next step will be to count each colony so we can get a much better picture of population size," said penguin ecologist Phil Trathan.

"Using satellite images combined with counts of penguin numbers puts us in a much better position to monitor future population changes over time."