(CNET) -- Despite the intense amount of interest in Apple's third-generation iPhone, this Friday's launch of the device may not bring out the hordes of Apple fans like it has in years past. 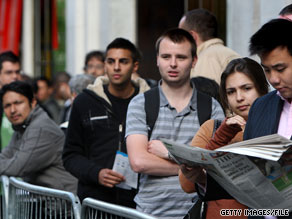 Apple fans wait in line to purchase the iPhone 3G in July 2008.

The first days that the original iPhone was on sale in June 2007 (and the iPhone 3G last July), lines at Apple and AT&T stores across the country snaked around city blocks, filled with both newbies and Apple's most loyal customers anxious to be the first to get their hands on the much-anticipated smartphones.

Some of the most ardent iPhone devotees camped overnight to be first in line. And, as a result, the launches were always accompanied by a media frenzy.

Things could be different this Friday for several reasons: Some current iPhone owners are being forced to wait to upgrade by their carrier; the hardware update isn't as dramatic as it has been in the past; and there's the possibility that the novelty of line-waiting has worn off.

AT&T's policy for current iPhone customers -- which it altered slightly Wednesday -- could be the biggest deterrent. AT&T customers whose contracts say they are eligible for a phone upgrade between now and September, and who pay at least $99 a month for iPhone service, will be able to buy the iPhone 3G S for the same price as a new AT&T customer: $199 for a 16GB model, or $299 for a 32GB model.

But if you don't fall into either of those categories, you could be eligible for "early upgrade pricing" of $399 for a 16GB and $499 for a 32GB. The full price of the phone without signing a two-year contract is $599 and $699, respectively.

In other words, AT&T is making it prohibitively expensive for many customers who are in the habit of getting a new model iPhone every year.

The reason makes sense -- the carrier is subsidizing the cost of the new phone for those who sign contracts and doesn't want to do that every year -- but it's likely to keep at least some of the most earnest and loyal iPhone customers away this Friday.

The other reason the crowds could be lighter this year is that the 3G S isn't nearly as big of a leap forward for Apple as in years past.

The original iPhone was the single-most anticipated piece of consumer technology probably ever, and the iPhone 3G was a major upgrade in terms of hardware and network connection speed from the original iPhone.

The 3G S is faster and has better battery life, as well as some new features like video recording and voice control, but for many users it might not be as compelling an update. Plus, most of the features lacking in the iPhone and iPhone 3G can be corrected by downloading the new operating system, iPhone OS 3.0.

Another difference this year: Apple allowed customers to preorder the iPhone 3G S online for home delivery. Last year, customers were forced to go to an Apple or AT&T store to activate their phone.

Whether or not they come out in large numbers on Friday, it sounds like the process might be a bit more orderly this year. The iPhone 3G S will be available for purchase at Apple and AT&T stores starting at 7 a.m. on Friday.

AT&T customers who preordered the device for in-store pickup can get their phones starting at 7 a.m. AT&T customers who didn't reserve one will have to wait until 9 a.m. The iPhone will be sold on a first come, first served basis at all Apple stores.

We'll be monitoring the launch in several different time zones on Friday as always, so be sure to come back here early Friday for the full run-down of the day's events.

All About Apple iPhone