10 things I love about the iPhone 3GS

(CNN) -- Another summer, another iPhone hardware update. This one's worth getting, too -- especially if you have an original iPhone or the iPhone 3G. 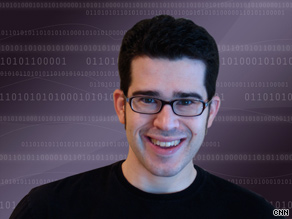 If you keep holding out because the iPhone doesn't have everything you want, it may be time to re-evaluate your position. This isn't just a phone -- it's a mobile communications device that boasts few true rivals in the marketplace.

Instead of waiting in line at an Apple or AT&T store, I simply ordered mine though Apple, and that process was amazingly simple. I was guaranteed delivery by the June 19th launch date, and indeed, my 32GB (black) iPhone 3GS was handed to me on Friday morning. No muss, no fuss. Kinda.

Before I get into the reasons I'm in love (LOVE!?) with the iPhone 3GS, let me just say that the activation process on AT&T's network was less than impressive.

It took close to 32 hours for the SIM card to activate, and AT&T could offer little to no assistance in that process. They were, quite simply, overwhelmed. I contend that a lot of perceived iPhone issues have more to do with AT&T than they do with Apple.

Even so, Apple saw fit to issue a $30 iTunes gift card to people caught in this delay. Now that is customer service.

So, what else has Apple given the world in the iPhone 3GS?

1. Video recording capabilities. With the swipe of a finger, you can record a quick video. With another swipe, you can trim your recording. With yet another swipe, you can email it or upload it to your YouTube account. Even when it's transferred over AT&T's 3G network, the A/V quality is rather impressive. Based on my first mobile YouTube upload test, I know I've sold a few more people on the 3GS. Apple seems to have integrated some kind of anti-shake feature into its video processing, too.

2. It's 50 percent faster than previous generations. Yes, believe me when I say that you'll notice a difference in speed (in direct comparison to the iPhone and iPhone 3G models). If you've never owned an iPhone before, then you're going to be equally as impressed. Animations are smoother, apps launch more quickly, and...well, the dang thing's just faster.

3. Twice the storage capacity. Are you good with 16GB? Would you rather have 32GB? Either way, you'll get what you want. I always say: Buy as much as you can afford.

4. Five times the amount of usable memory. Given that iPhone OS 3.0 now supports push data (that is, it allows applications to send and receive data in the "background"), you're going to want more than just 20MB available to you. Whereas the iPhone 3G comes with 128MB of memory, the iPhone 3GS has 256MB. This translates into far fewer app crashes.

5. Voice control. Press and hold the home button (that's the round thing at the bottom of the iPhone), and you'll be passed to the Voice Control application -- allowing you to tell your device to call a friend, play a song, and more. It didn't require any training for me to use, either.

6. Compass. Yeah, I have no idea when I'm actually going to need this. More importantly, app developers will take advantage of this new feature. Turn-by-turn navigation, anyone? TomTom's working on an app for that.

7. Improved battery life. I'm not sure you could make it through an entire working day without attaching an external battery pack to your iPhone, but Apple's found a balance in performance and power with the 3GS. They had to throttle the processor speed somewhat, slightly diminish the capability of the video processor, but at least people can't complain that they always have to keep 'er plugged in to an external power source.

8. Better camera. Isn't 3 megapixels usually better than 2? Generally, yes. But Apple also added the ability to take close-up (macro) shots, and an intuitive autofocus feature. Simply tap the area on the screen you want to be in focus, then take your shot. And before I forget, a friend told me that if you wanted to take a picture of yourself (with the screen facing the other direction), tap and hold the "snapshot" icon. Flip the screen away and when you're ready to shoot, simply lift your finger from the trigger. Thanks, David!

9. Same form factor as the iPhone 3G. Why is this nice? Well, you don't have to run out and buy new cases for your iPhone (if you were previously using the iPhone 3G). If this is your first iPhone, or you're upgrading from the original, then you'll still have a full range of accessories for your iPhone 3GS. I'm sure a revision is in the iPhone's future, but not this year.

10. Weight Loss support. Okay, this one's a bit of a stretch, but the iPhone 3GS has the Nike sensor built-in (no receiver required). Maybe I can convince people that I'm more healthy because I have the ability to track progress? Meh. Still, it's a convenience for those who use it -- I'd just recommend a waterproof case for your iPhone to keep it from being damaged by sweat!

Admittedly, the iPhone isn't "cheap" to own. But the device is only getting better with time. The operating system is ever-maturing and (for the most part) backwards-compatible with older iPhones, the 3G S's hardware specs are comparable to today's sexiest smartphones, and Apple isn't going anywhere anytime soon.

The only iPhone killer on the market today...is a newer iPhone.