Michael Jackson is Facebook's most popular

LONDON, England (CNN) -- Michael Jackson has officially become the most popular person on Facebook, with more than 7 million fans on the social networking site. 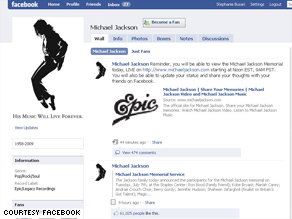 The Michael Jackson Facebook page is now the most popular on the social networking site.

Previously, the most popular person on Facebook, with just over 6 million fans, was U.S. President Obama.

Over the past week, Jackson's page has grown from 80,000 fans to just over 7 million, generating the largest response on a Facebook page, the social networking site says.

He has continued to gain about 20 fans per second and even more during peak traffic hours, said social media commentator Nick O'Neill, founder of the Social Times Web site.

During his memorial service at the Staples Center in Los Angeles, California, all 10 trending topics on Twitter.com were Jackson-related.

Jackson's popularity and the viral nature of Facebook fan pages are the primary reasons for the huge fan base, O'Neill explained.

He said, "It's simply his popularity. Also, as users become fans, the page gets recommended to others, driving the viral growth of the page.

"Michael Jackson is simply the largest celebrity in the world. While he was a controversial figure, he clearly attracts the attention of the global media," he continued.

The Facebook page has become an online memorial to Jackson, with thousands of comments from around the world; dozens appear every minute.

Free virtual versions of Jackson's famous glove are the most popular gift on the site, with more than 800,000 sent to members.

The huge following leaves the singer's heirs (and his record label) with a massive network to communicate with fans and continue the massive resurgence of interest in Jackson's music, O'Neill said.

"While Sony has not heavily engaged the fan base on Michael Jackson's page, they at least have a presence. If your fans are there, you should be there.

"This also provided an ongoing promotional channel for any future products that are released. It's simply not an option and will become a component of all marketing strategies."

There have been 2.6 million downloads of Jackson's music since his death. He has the top two albums on iTunes, as well as three of the top 10 singles.

In the United Kingdom, Jackson held 11 of the top 200 album positions and 43 of the top 200 singles, based on sales monitored by the Official Charts Co. for the week ended June 27.

His "Number Ones" album topped the OCC album chart after selling 46,400 physical copies and 10,000 downloads.

The surge for demand in Jackson's music looks likely to continue for several months: The fan page has a music player with some of Jackson's hits and an option to buy them through Amazon.