WASHINGTON (CNN) -- The first man on the moon marked the 40th anniversary of his historic achievement with characteristic understatement Monday, calling the program that put him on the lunar surface "a good thing to do." 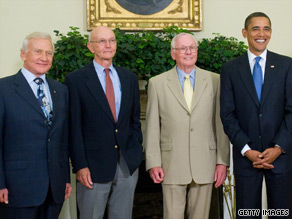 Apollo 11 commander Neil Armstrong joined crewmates Michael Collins and Buzz Aldrin at the National Air and Space Museum, capping a day of commemorations that included a stop at the White House. During brief remarks at the museum, he said the mission was the climax of a "staggeringly complex" endeavor that "required the very best in creativity, determination and perseverance that could be assembled in the American workplace."

"Those successes were very impressive 40 years ago, but they were not miraculous," Armstrong said. "They were the result of the imagination and inventive minds of the people in the Apollo project since its inception eight years earlier."

The July 20, 1969, moon landing followed four test missions and came just two years after a fire that killed the first Apollo crew. Six lunar landings followed. A seventh flight, Apollo 13, was forced to abort its landing after an oxygen tank explosion crippled the spacecraft; the crew used its lunar lander as a "lifeboat" for much of their harrowing return to Earth.

Armstrong called the Apollo program "a superb national enterprise" that "left a lasting imprint on society and history."

"Our knowledge of the moon increased a thousandfold and more," he said. "Technologies were developed for interplanetary navigation and travel. Our home planet has been seen from afar, and that perspective has caused us to think about its and our significance. Children inspired by the excitement of space flight have come to appreciate the wonder of science, the beauty of mathematics and the precision of engineering."

He concluded, "Apollo was a good thing to do."

While fellow moonwalker Aldrin appeared on an episode of "The Simpsons," wrote a memoir that frankly discussed his bouts with alcoholism and depression and once punched out a conspiracy theorist who argued the landing was faked, Armstrong retreated to quiet obscurity after leaving NASA. He taught engineering at the University of Cincinnati in Ohio in the 1970s, was chairman of an aviation computer company until 1992 and served on the commission that investigated the loss of the space shuttle Challenger in 1986.

He has given only occasional interviews in the intervening decades and stopped signing autographs because he discovered his signature was being sold for profit.

Collins, who flew the Apollo 11 command module Columbia while Aldrin and Armstrong took the lander Eagle to the lunar surface, went on to serve as director of the Air and Space Museum. Columbia is now a prize exhibit at the facility.

Earlier, the crew met with President Obama, who hailed them as "genuine American heroes" and "the touchstone for excellence in exploration and discovery." Obama said the landing continued to inspire young people to study math and science in hopes of becoming astronauts.

As a boy in Hawaii, Obama recalled, he would go out with his grandfather to welcome back astronauts from missions that concluded with Pacific Ocean landings.

"I remember waving American flags and my grandfather telling me that the Apollo mission was an example of how Americans can do anything they put their minds to," he said.

"What you achieved will never be forgotten," Bolden said. "Centuries from now, future generations will remember it was you -- you -- who took humankind's first steps beyond our planet."