Lucy Siegle is a British journalist specializing in ecological issues and trends and a TV presenter for the BBC. She told CNN what green gadgets get her seal of approval

(CNN) -- What green gadgets are worth splashing out for?

Lucy Siegle, a British journalist specializing in ecological issues and trends, told CNN which eco gizmos get her seal of approval. 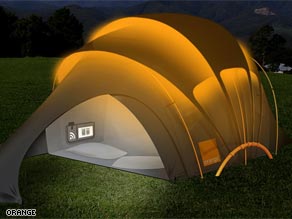 Siegle: I'm not big into camping but it's a massive thing here in the UK. During the summer barely a weekend goes by without a festival of some sort. The only thing however that gets me through the frequently rain-sodden experience is the ingenuity of a solar powered tent (I love them).

Siegle: I'm acutely aware of the specter of e-waste because I make films about fly tipping in beautiful parts of Wales and come face to face with mounds of dumped monitors and keyboards. We have an issue in the UK with the Waste Electrical and Electronic Equipment (WEEE) directive as there's a lot of crime -- see as evidence how a consignment of e-waste was found in Brazil recently. It's horrible. Anyway all this makes me technologically monogamous -- I keep my machine until the bitter end. However the bitter end is approaching for my Mac Book as half the keys have sprung off so I came across this.

The Fit-PC 2.0 claiming to the world's smallest fully functioning PC and also the greenest. 115mm x 101mm x 27 mm. That's tiny! I love dematerialization of these objects. It should be sustainable design realized. If the makers are to be trusted, it uses 90 per cent less energy than a standard desktop PC. It uses less energy than a low energy light bulb. The main board is lead free.

View a gallery of the gadgets »

Siegle: I just got one of these, and have become quite the Stepford wife. Well, as far as crumbs are concerned - my house is a zero tolerance zone. Dyson is the most celebrated UK inventor, famous for the bagless vacuum cleaner. This offspring, the handheld, chargeable vac does some spectacular stuff. It 'spins dust and dirt out of the air' using a motor that spins ten times faster than the engine of a Boeing 747 courtesy of digital switching (subject to 15 patents).

Another key factor is that this alternative motor does not cause those polluting carbon particles. All of this may sound rather energy hungry, but the new digital motor is 84 percent energy efficient. The reason I've listed it here is because it has huge potential in all sorts of applications and is a physical embodiment of Dyson's insistence that 'bigger motors don't always equal better performance'.

Siegle: This is a retro inclusion (odd for a gadget list I know). I'm into the idea of Dynamic Demand -- regulating flow of power to our homes to even out and to make the grid more efficient (in the UK two thirds of power, mostly produced by coal fired power stations is lost before it gets to our homes). The Savaplug regulates flow on a microscale when you plug in an old style fridge. I don't need mine any more -- I have a new style, energy efficient fridge these days but keep it just in case I find someone who doesn't.

Lucy Siegle: Very simple, but actually very effective. I was sent this as a promotion. When you buy one, another is given free to kids in the developing world who have to study at night. A slightly mawkish, marketing stunt, but one that still appeals. I was amazed how it charged up in my kitchen, without me having to do anything. It was ready when my two year old nephew came to stay, fell out of his bed (I've subsequently got a bed guard for him) and needed the light on. The Sunnan has a warm, comforting glow.

Lucy Siegle: I recently made a film about hydrogen fuel cells and how a British scientist, Dr Tom Bacon developed fuel cells for the Apollo 11 command center. Nixon (okay, not a president known for his probity) told Bacon that there would have been no mission without Bacon and his fuel cells. Anyway, it made me consider this technology more seriously.

At Cranfield University (there are other partners too) they are perfecting a hydrogen fuel cell car. If it was funded like electric -- an easier option for the automotive industry -- it would have taken off by now (to pun from the Apollo connection).

Hugo Spowers who is masterminding the project is an ethical visionary. He used to work in Formula One racing -- hardly known for its ethical outlook -- then did a Schumacher course at Dartington, famed for its deep green economics. He also has an MBA from Cranfield and is running this project as a shared commons program. Extraordinarily enlightened. The batteries are being recharged in China currently having been tested into submission, but when they come back I'm hoping for a test drive.