Wallet of the future? Your mobile phone

(CNN) -- These days, it seems that most Americans carry three things in their pockets or purses at all times: keys, a wallet and a phone. 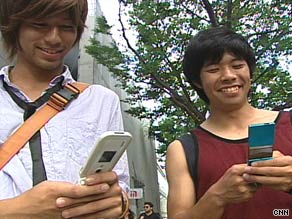 A survey says 15 percent of phone users in Japan use their phones to make payments.

But, in the not-too-distant future, you may be able to leave the wallet and the keys behind.

The mobile phone is staging a coup.

Some analysts say that within five years, mobile phones in the United States will be able to make electronic payments, open doors, access subways, clip coupons and possibly act as another form of identification.

These futuristic uses for phones are becoming reality in countries like South Korea and Japan, which typically are ahead of the United States when it comes to mobile technology.

A 963-person survey by Forrester Research, for instance, found that 15 percent of Japanese mobile phone users make payments and purchase products in stores with their phones.

The ideas have been tried in the United States too, but with less success.

In the late 1990s and early 2000s, banks and cell phone makers started conducting trials with U.S. customers. Limited groups of people were given the ability to scan their phones to make payments, enter stadiums and access public transit.

Those phone-forward guinea pigs didn't like the new functionalities as well as expected, and the ideas never took off on a commercial scale, said Ed Kountz, a senior analyst at Forrester.

But Kountz said there's now resurgent interest in merging phones with wallets and keys. In 2009, people are more dependent on their phones than they used to be.

"I think it is different this time around," said Kountz, who believes that phones in the United States will be used to make mobile payments within five years.

The fact that phones are everywhere and are commonly used to access the Internet and compute means they're well poised to overtake wallets, said Justin Denison, vice president of strategy for Samsung Telecommunications in the United States.

Gartner Inc., a technology research company, issued a report in May saying mobile payments will increase 70 percent in 2009, to 73 million people worldwide.

By 2012, the company says, 190 million people will make mobile payments.

Still, that adoption rate is relatively low. Only 3 percent of people in North America are expected to conduct mobile payments in 2012, Gartner says.

There are no guarantees that the technology will catch on in the United States as it has in Asia, Denison said.

"We can make investments. We can test things. But it's not always the case that [new technologies] get adopted here," he said.

If phones replace wallets, would-be thieves will see every person walking down the street talking on his or her phone as a target for robbery, said Lillie Coney, associate director of the Electronic Privacy Information Center.

"It would be the ultimate form of identify theft, that's for sure," she said.

Banks and mobile phone makers say the technology is safe. But it's not clear whether consumers will demand the change.

There's also no firm plan about who would pay for the technology to be added to phones and put into stores, said Simon Pugh, vice chairman of the NFC Forum, which supports the technology, and head of mobile payments at MasterCard.

"With any new technology, there's an ecosystem that needs to develop to make it viable," he said. "One of the key things that's needed is new hardware. You need a special chip in the phone, and you need another radio frequency antenna to communicate ... and that costs money."

Squeezing the contents of a person's purse into a phone relies mostly on a technology called near-field communication, which allows any enabled device to communicate with a cash register or subway turnstile through a secure radio frequency.

The technology is similar to the scanners and passes that allow commuters to pay for drives on a turnpike without stopping at a toll booth.

When a phone is enabled with near-field communication technology, shoppers can load bank and credit card information onto their phones and then scan them to buy goods at the grocery store, gas station, subway or any other place set up to read the device.

Doug Brown, head of mobile product development at Bank of America, said the idea is popular with consumers because it simplifies their lives.

"You don't need cash anymore. You don't need your wallet. That's really the endgame here, is that we can replace the physical wallet and all of the cash needs and the plastic that you're using today," he said.

Eye scans and fingerprints would make phone IDs and payments more secure, Brown said. The ID technology might work like a corporate security badge, which pulls up personal information when scanned.

Some hotels have played with the idea of using near-field communication technology to enable a guest's phone to act as a room key. According to the NFC Forum, a New Zealand hotel last month installed locks that are opened with mobile phones.

People can make transactions with their phones through lower-tech means, too.

Mobile banking apps use the Internet to allow people to transfer money and purchase goods online. And in some parts of the world, text messages sent by mobile phone are used as a form of currency.

In Kenya, for example, more than 6 million people are registered with M-Pesa, a service that lets people send text messages to make payments and transfer money from phone to phone.

Some of those users have access to banking for the first time because of their phones, said Susan Teltscher, head of market information and statistics at the International Telecommunication Union.

iPhone users in the U.S. and elsewhere already can upload plane tickets onto their phones and then scan a digital version of the ticket's barcode instead of presenting paper tickets.

There's hope that, eventually, bank customers here may have individual barcodes they can use to purchase goods in stores.

Kountz, the analyst at Forrester, said the economic recession may hold many of these ideas back. And consumer interest in mobile payments remains low: less than 10 percent, he said.

To them, it's just a matter of how and when -- and who will pay.