(CNN) -- It's a blog where people post, and make fun of, pictures of out-of-shape, poorly dressed and otherwise awkward people shopping at Wal-Mart. 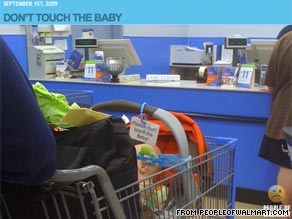 The "People of Walmart" blog features photos taken by users at the mega-chain.

And, in less than a month, with no marketing to speak of, it's become the toast of the Internet.

"People of Wal-Mart," a gag started by two 20-something brothers and their buddy to share crazy pictures with their friends, has gone viral. Promoted largely on sites like Digg and Funny or Die -- and linked ad nauseam on Facebook and Twitter -- the site picked up enough traffic to crash its servers on Wednesday.

"I'm still baffled -- I really am," said Andrew Kipple, 23, one of the creators of the site, who said his team was frantically working Wednesday to add enough server space to handle the surge in traffic.

Photos on the site, sent in by viewers all over the United States, frequently feature overweight people wearing tight clothes, bizarre hairstyles (with versions of the short-in-front, long-in-back "mullet" leading the pack) and fashion crimes ranging from furry leg warmers to miniskirts that leave absolutely nothing to the imagination.

There's a guy enjoying a can of beer outside a Wal-Mart, a guy dressed as Captain America and another guy with a goat. Yes, a live goat.

Andrew and his brother Adam, 25, said they thought of the site after a visit to a South Carolina Wal-Mart where they saw a woman they believed to be a stripper, wearing an obscene T-shirt and leading a toddler in a harness. Around the next corner was a man with a beard reminiscent of the rock band ZZ Top.

"It's kind of like the light bulb went off," Andrew said. "We get the e-mails already from people who are like, 'Why didn't I think of this?' We just happened to be fortunate enough to have the ability to actually follow through on it."

Their site was keeping up when it was getting about 500,000 views a day, but got swamped by a new spike in traffic late last week. The brothers, along with partner Luke Wherry, 23, say response has been largely positive -- with only a handful of complaints out of every 100 e-mails they get.

A post on the group's Facebook page Thursday morning said they had gotten more than 1.2 million page views on Wednesday, even though the site was down for much of the day.

The site was getting two or three photo submissions a day until last week they said -- when all of a sudden hundreds of e-mails, most with pictures, started rolling in.

But not everyone appreciates the humor -- saying the site goes out of its way to mock poor and rural patrons of the store, reinforcing stereotypes along the way.

"American culture likes to single out people who appear to be different," said Tim Marema, vice president of the Whitesburg, Kentucky-based Center for Rural Strategies. "Whether it's a joke or not, all depends on which side of the camera you're on."

Furthering stereotypes can strengthen the rifts between rural, urban and suburban residents and, in the worst-case scenario, can affect the way some people are treated by government and industry, he said.

Wal-Mart, the world's largest retailer with more than 4,200 U.S. stores and over $400 billion in annual sales, may be more prominent in rural areas, Marema said, but to use that to stereotype its shoppers doesn't make sense.

"The reality is that everybody shops at Wal-Mart," he said. "If you want to find the guy in the golf shirt and khakis, he's there too."

A spokesman for Wal-Mart Stores Inc. declined to comment for this story.

The brothers say they don't mean for their site to be mean-spirited, and that they have standards for which photos they use.

Andrew Kipple said they don't include pictures of people with physical disabilities or apparent mental disabilities and won't run a picture of a person simply because they are overweight.

"We're not going to go out and say we're not making fun of anybody or we're the nicest guys in the world. But I think you have to draw a line somewhere when you have a site like this," he said.

"If you have a mental handicap -- that's not funny. If you have lost a leg and you're on a crutch or in a wheelchair, some people may laugh at that, but we don't find it funny."

He denied complaints that the photos -- many of which attract a string of snarky comments from readers -- single out people because they are poor or unattractive.

"If you make a bad decision on what you're going to be out in public wearing, that's what we're looking for," he said. "If you're 400 pounds, you shouldn't be wearing nothing but a pink tube top. Even if you shop at Goodwill, wherever you go, the shirts they sell have sleeves and they have your size."

Adam Kipple, who works as a Web designer for a marketing firm, said he and his brother are frequent Wal-Mart shoppers themselves and that, in a way, their site could be boon to the shopping chain.

"People [who send e-mails wanting to take pictures] say, 'I haven't been to Wal-Mart in years, but now I have a reason to go,' " he said.

All About Wal-Mart Stores Inc.