LONDON, England (CNN) -- A new generation of deep-sea submarines light enough to launch from a yacht could open up the ocean's depths to amateur explorers. 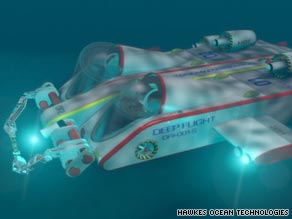 The "Deep Flight" winged submersibles are experimental prototypes designed to dive to depths of up to 37,000 ft -- almost four times as deep as a giant squid dives -- descending at 400 ft/minute.

They are the brainchild of submarine designer Graham Hawkes who is in the process of building commercial models that can reach those depths.

Hawkes has been designing submarines since the 1960s, working initially with the British Special Forces and then for the oil industry.

He now sells his designs to wealthy sailboat owners as the ultimate yacht accessory.

"If you have the money for a mega-yacht and you're just limited to the surface, then what a waste. That's my perspective," Hawkes told CNN in a telephone interview.

The late billionaire balloonist and adventurer, Steve Fossett, commissioned one of Hawkes' experimental prototypes, "Deep Flight Challenger," which can dive to 37,000 ft. The craft was four weeks away from delivery when he died.

Venture capitalist Tom Perkins has ordered one of Hawkes' first commercially-available models, "Deep Flight Superfalcon" for his yacht "Maltese Falcon." The $1.5 million sub is capable of diving to 1,000 ft and comes complete with air conditioning.

While price means these craft are out of reach for most leisure users, Hawkes denies they are simply rich men's toys.

"The thing is a space ship, I don't like the term toy," said Hawkes of the subs which his company is also positioning as a cheaper alternative to research craft for science, industry and exploration.

"'Superfalcon' has a capability greater than the U.S. Navy.

"I personally very much like the idea of empowering individuals to explore."

Unlike conventional subs which get heavy and sink, Hawkes' designs are positively buoyant and have to power down into the depths: "It's like an airplane in reverse."

They have life support good for 24 hours in the depths and a range of 10-20 miles. They are also quick and highly maneuverable.

Hawkes, who describes himself as claustrophobic, says diving deep in one of his subs is an "awe inspiring experience."

"We just finished flight testing 'Superfalcon. It goes down vertical and you pull one gee when you make a turn," he said.

Paul Willis contributed to this report.