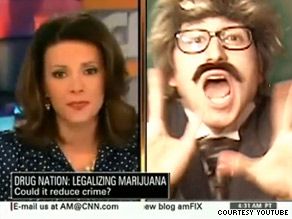 The Gregory Brothers have become a viral hit with their "Auto-Tune the News" videos.

No matter how hard some people -- notably Jay-Z --have tried to kill the trend of musicians using computers to make their voices sound like whiny robots, Auto-Tune technology continues to ride a cultural high.

Now the voice-altering effects are migrating from recording studios to YouTube and mobile phones.

An iPhone app called "I Am T-Pain" lets people manipulate their voices to sound like the popular rapper and Auto-Tune advocate.

The Gregory Brothers, a sibling band out of Brooklyn, New York, has become a hit on YouTube with a series of videos that Auto-Tune cable newscasts and political speeches.

The group, which also tours as a low-fi soul band, started its series of videos called "Auto-Tune the News" during the 2008 presidential debates and has gained millions of fans in recent months.

CNN spoke with Andrew Gregory, a 27-year-old member of the band, about the popularity of Auto-Tune -- the trademarked name for the popular pitch-correction software -- and the role of technology in music and society.

The following is an edited transcript of our conversation:

Why do you think your videos have taken off like they have?

I think with any sort of viral video there's a little bit of luck involved. So we're counting our lucky stars that we've been lucky enough to have it take off like that.

At the same time I think the novelty of seeing people like Katie Couric and Newt Gingrich sing has really captured peoples' attention.

How do you make the videos? What actually goes into it?

Michael likes to joke that there's a huge Auto-Tune lever that he hooks up to his computer and whenever he sees video footage he just pulls the lever, and anything that strikes his fancy is automatically Auto-Tuned.

Really, by the time the video gets made I'd say it's eight or 10 days of work that goes into one of these videos, between the four of us.

What makes someone a good candidate for Auto-Tuning?

An example of a great candidate for Auto-Tuning would be either Katie Couric or Joe Biden. Both Katie Couric and Joe Biden have just continued to astonish us with their unbelievable, almost hidden melodies in their speaking voices.

A lot of it has to do with how they project their voice in terms of their soft palate. But it also has to do with how much of an oratorical fashion they speak. Joe Biden, in a lot of his speeches, is delivering them in a preacher sort of fashion that tunes really well.

Does President Obama make for a good Auto-Tune?

Since he's been president, he's been so relaxed and sort of so laid back and cerebral and sort of intellectual. He's not been quite as excellent for Auto-Tuning because there's a lot more of a mumbly tone about him. A lot less of the "Yes we can!" and a lot more of the "Weeeeell, as we see ..."

Has "Auto-Tune the News" helped your other musical efforts or do you think it's pulling you away?

It's certainly making us focus a lot more on "Auto-Tune the News." As the videos have sort of grown in scope and become more popular, we can't help but continue to work on them as our fans clamor for more.

Do you ever use Auto-Tune in the other performances, like in your band?

We've never used it live. We're no Ashlee Simpson. But I think we've used it a little bit on our record.

Right now it's a huge fad to Auto-Tune the crap out of people so that they sound like robots. But on pretty much any record you listen to these days there's some level of Auto-Tune on it, even if it's a very, very small amount.

If there's just one small note that's just a little bit flat, why wouldn't you Auto-Tune it to make it sound OK?

Do you think it's hurting music at all that people expect a singer's pitch to be perfect?

It means that people who can't sing as well are becoming famous singers. But I don't know, that's why I love going to see live music, because that really sorts out the real singers from the not-so-real singers.

If you could invent any technology or pick a technology that you would like to see invented, what would it be?

Oh, wow. I'd probably go for a teleportation machine myself. ... Like the one they used in "Star Trek," hopefully, right? Where you can jump in the teleportation machine and get to your gigs without having to carry all your amps and drive eight hours in your van. I mean, I play music for free. It's carrying my amps and driving places in my van that I have to charge people for. That'd be the real revolution for the music industry.

Do you have the T-Pain iPhone app?

Yeah, we were beta testers for that app.

Do you use the app in day-to-day life?

Do you have a favorite iPhone app just in general?

I'm not much of an app guy, but when I really need to kill some time I go for PapiJump. It's like the simplest, dumbest game possible on the iPhone. Other than that, the New York Times app is nice.

What have you learned about the Internet in watching your videos go viral?

I think a lot of people are using the Internet for just a sort of quick laugh fix. Whether you're bored at work or looking for something fun to do at home, people sort of live serious enough lives. I think everyone loves to laugh. And if you can get five minutes of the day at work ... to get a couple yucks in, I think you'd rather do that than watch your latest YouTube conspiracy movie or something.