3-D television expected to come to homes in 2010

(CNN) -- Three-dimensional images are expected jump out of movie theaters and into living rooms by next year. 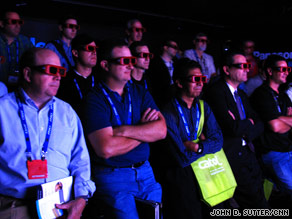 Sony and Panasonic say they will release home 3-D television systems in 2010; Mitsubishi and JVC are reported to be working on similar products.

"TV finally becomes real" in three dimensions, said Robert Perry, an executive vice president at Panasonic. "You're in it. It's the next frontier."

Perry compared the 3-D transition to the switch from black-and-white to color television and the shift from standard- to high-definition images.

ESPN is test-recording some sporting events in 3-D, using cameras with two sets of lenses, which would make football players appear to jump out of home television screens during live 3-D broadcasts.

And, although television makers haven't released specifics, the price of 3-D TV -- which requires a new television, broadcasting content and 3-D glasses -- is not expected to be substantially higher than some high-definition televisions on the market now.

Still, there are skeptics who say that 3-D is not ready for prime-time home viewing.

There are concerns that 3-D broadcasts, which require twice the data, will gobble up an unworkable amount of television bandwidth. And some worry that 3-D glasses and graphics won't make a smooth transition to American living rooms.

Shane Sturgeon, publisher of HDTV Magazine, said some of the glasses give him a headache and will block some people from buying the new technology.

"From what I've seen from most of the manufacturers, it's just not there yet," he said of 3-D TV technology. "I think right now, the technology -- whether you're talking about the refresh rate or the strobing or the glasses -- there are too many things right now that get in the way of enjoyment of the film for it to kick off."

All 3-D technology relies on the idea that if separate images are presented to the left and right eyes, the human brain will combine them and create the illusion of a third dimension.

TV makers go about this in different ways, though.

Panasonic and Sony, which demonstrated their products for CNN at a recent tech expo in Atlanta, Georgia, use "active glasses" and TVs with high refresh rates to achieve the effect.

Two images, one for the right eye and one for the left eye, alternate quickly on the TV. Shutters on the 3-D glasses swap the viewer's vision from right eye to left eye at the same rate: 120 hertz, or 240 hertz for the images together. The TV connects with the glasses through a sensor that's placed between the lenses on the glasses.

The effect moves so quickly that it tricks the brain into merging the images and creates the perspective needed to see images in 3-D, he said.

Glance away from the TV, though, and you can see the lenses opening and closing, which irritates some people.

Those who saw the technology at the recent Custom Electronic Design and Installation Association Expo seemed wowed by Panasonic's 3-D footage of Olympic events and skiers who appeared to send snow flying into the laps of the audience.

David Lesch fidgeted with his 3-D glasses during Panasonic's demo but said the 3-D picture on the company's 103-inch plasma screen was excellent.

However, it may not be effective for all TV programming, he said.

"I cannot imagine that I will watch CNN in 3-D," said Lesch, sales director at AV Media, which sells electronics. "But for sports, yes. To watch soccer and ice hockey -- anything -- that would be great."

Sturgeon, of HDTV Magazine, said JVC is working on a type of 3-D technology that's different form the strobing glasses used by Panasonic and Sony.

JVC's version uses polarized glasses to separate the right-eye image from the left-eye image and is more pleasing to the eye, he said.

Aside from the kooky glasses, people who want to watch television that jumps off the screen will need something to watch. The process of making live television work in 3-D probably would involve a major conversion of broadcast equipment.

Also, Blu-ray is said to be working on a product that would play three-dimensional movies at home.

Panasonic and Sony said they're still working out some kinks in their 3-D entertainment systems. The TV makers hope to ride the wave of popularity of improved stereoscopic 3-D movies, such as recent hit "Up," that are being shown in theaters.

Perry, of Panasonic, said he expects 3-D TV to be common in homes within five to 10 years. Technology that will make 3-D TV possible without glasses should be ready in 10 to 15 years, he said.

Michael Bridwell, spokesman for Digital Projection, a company that makes high-end 3-D home theaters, said 3-D is the biggest technology coming to television and home movies in the foreseeable future.

Well, at least "until we get to holograms," he said.