OLED TV makers look to shift out of neutral

(CNET) -- Though LG's eye-popping OLED (organic light-emitting diode) display wowed audiences in Berlin last month, it's best not to get too excited. There's not going to be more where that came from, at least for a while. 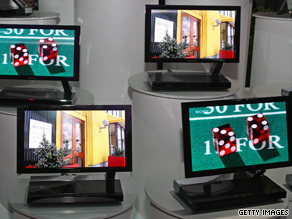 Display industry is at least three years away from turning out larger OLED TVs at reasonable pricing.

The industry is still at least three years away from churning out standard-size televisions of 32 inches or larger at something approaching acceptable prices.

And though Sony grabbed all the attention in early 2008 with its $2,500 11-inch OLED, it's faded into the background when it comes to nudging the technology forward. Initially promising to follow up with 21-inch and 27-inch models, Sony's deferred those plans while battling bigger problems with its TV business.

With Sony on the sidelines, it seemed like we were witnessing yet another false start for a technology that's been intent on challenging existing TV standards like LCD and plasma for almost half a decade now.

Beset by the standard issues that come with bringing a new technology into the mainstream, like the exorbitantly high cost of development, OLED TVs might be on the verge of shifting out of neutral as new standard bearers for the technology emerge.

The ones to watch now are Samsung and LG Electronics, which have each signaled that they're ready to make larger investments in OLED technology for TVs.

At the OLEDs World Summit 2009 in San Francisco on Wednesday, still most of the hope surrounding this nascent branch of the display industry was focused on energy efficient lighting and smaller displays for cell phones and MP3 players, since that's where the money is coming from right now.

DisplaySearch analyst Jennifer Colegrove said that the second quarter of 2009 was the best quarter yet for the OLED industry, with revenues reaching $190 million worldwide. It's good -- and perhaps unexpected -- news for a burgeoning technology that was just beginning to ramp up right when the recession hit.

But while they're finding success putting OLED in smartphones, these companies are still trying to figure out how to prove that the desirable properties of OLED -- ultrathin displays, brighter, crisper images, and improved energy efficiency -- can be produced efficiently on a large scale.

The reason they're extra cautious: the factories needed to stamp out 30- and 40-inch TVs cost at least $1 billion to build and equip. "They need to prove it will scale before making a huge investment," noted Barry Young, managing director of the OLED Association.

For now, these 11- and 15-inch TVs are coming off production lines intended to make 2-inch and 3-inch displays. It works, but only as a temporary solution; they can't produce the amount of displays per year necessary to be profitable or meet demand.

LG says it plans to start selling its 15-inch OLED in South Korea by the end of the year. But for now, it only has the capacity to make 200,000 per month, or 2.4 million per year. Compare that to Samsung and its more advanced infrastructure for OLED displays for cell phones and MP3 players.

On Wednesday Ho-Kyoon Chung, advisor to Samsung Mobile Display, said by next year its factories will be pumping out 10 million displays per month smaller than 15 inches.

LG won't be able to expand past 200,000 per month until at least 2010. But the two highly competitive Korean companies watch each other closely ("They're like two brothers that fight. One always has to do what the other is doing," is how one industry analyst put it). The competition's effect could push OLED TVs closer to the mainstream, both in screen size and in price.

The cost of OLED TVs at retail is still laughably unrealistic for most. "Price points on these displays are very steep," noted iSuppli's Jakhanwal. "The 11-inch Sony is still $2,500. The LG (OLED TV) might be in the same range." Though larger size OLED TVs might start appearing in three years, pricing is harder to predict now.

There's also a wild card in this deck: Apple. A whirlwind of speculation has surrounded the company's plans (or lack thereof) for building a tablet computer. Some in the industry have wondered if the screen will be an OLED, though Jakhanwal said that's less likely.

"I feel they're more likely to start using OLEDs for iPods rather than launching straight away to a tablet. Apple's strategy has always been to use current, existing technology for its products, and work on (getting the) pricing down," she said.

Though that could be tough for suppliers because Apple has a way of getting prices to "unbelievable levels," as she noted, it could be a boon to retail shoppers.

If Apple were to drive down the prices of smaller OLEDs, even for iPods or iPhones someday, it could shift pricing of larger displays for notebooks and TVs as well. And cheaper components mean more vendors will buy them and more choice for consumers.

In the meantime, "Price continues to be an issue," said Jakhanwal. "High premiums (are) not acceptable in the market."

All About Information Technology • Digital and Satellite TV Receivers