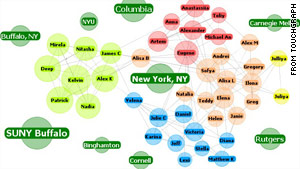 A new book finds that our likes and dislikes are influenced by our social networks, both online and off.
STORY HIGHLIGHTS
RELATED TOPICS

A new book finds that our likes and dislikes are influenced by our social networks, both online and off. Network man's likes and dislikes, in turn, affect the behavior of his friends, and their friends, and their friends. For example, when he gets into an obscure indie rock band, he shares an album with his friend, who likes it so much that he recommends it to his cousin, who spreads the word to her friends.

Read more on their research about how happiness is contagious.

These are not small effects. "If a mutual friend becomes obese, it nearly triples a person's risk of becoming obese," the book said. Even geography doesn't matter; you're still at risk for gaining weight if a friend 1,000 miles away gets bigger

Why is that? Obesity seems to spread in networks because of behavioral imitation -- you copy what people close to you are doing -- and shared expectations called "norms," the authors said. When you see people close to you gaining weight, that makes you readjust your own idea of what is an acceptable body size

Read more about how "overweight" is relative.

"On the one hand, yes, our work showed that if you keep your friend, you are going to be susceptible to their bad behaviors," he said. "On the other hand, time and again, what our work shows is that every friend makes you healthier and happier

The Iranian blogosphere, despite having a government that blocks access to several Web sites, expresses many viewpoints on the Internet. In June, Iranian citizens used Twitter to organize and protest against what they viewed as an unfair election.

Read more about the power of retweeting.