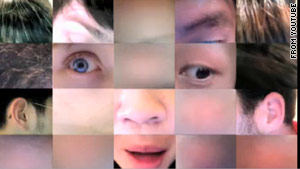 In recent months, the collaborative projects have been showing the professionalism it takes to get noticed amid the clutter of content on the Internet, said Ze Frank, an online personality who orchestrated several early online art projects.

"That's going to keep happening," he said. "So as soon as we finally nail this down you'll have another group of talented artists that are going to say, 'Well, I'm going to dosomething completely different.'"