First ladies tell CNN why they love to tweet 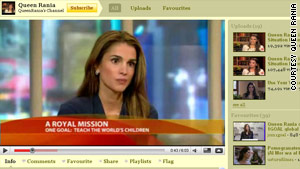 London, England (CNN) -- Once upon a time royals and elites had to don elaborate disguises to mingle with their people. Now they have Twitter.

But, while it is no surprise to find world leaders using the Internet to get their messages across, now their partners are getting in on the act.

But it is Queen Rania -- whose husband is Jordan's head of state, King Abdullah II -- who may be social media's biggest champion: she has her own Youtube channel, a Facebook account with over 100,000 "friends," a Twitter account with nearly 1 million followers and her own Web site.

The Jordanian queen told CNN that these channels help her stay plugged in: "Social networks are the fastest, flattest and simplest tools to connect with everyone, from new-found friends and former flatmates to favorite athletes and artists.

"The Internet has made it easier for everyone to communicate with their fans and friends, whether you're a blossoming blogger or a seasoned politician. For people in my position, it helps demystify the title and clarify what it is I do and what it is that's important to me."

As if to prove the point, one recent tweet revealed she was indulging in the very un-royal activity of watching a George Clooney movie -- albeit one that has yet to be released

"Back home, rewarded myself with movie+popcorn: The Men Who Stare at Goats," she wrote, adding: "What's not customary is how HILARIOUS Clooney is in this movie!"

Jennifer McLean, marketing vice president of Techrunch, the popular Web site that reviews Internet products, told CNN: "It's a great thing. In the past, we weren't really able to know first ladies like Jackie Kennedy, except through edited magazine or newspaper formats.

"It's also a very smart approach," she added. "With the Internet, first ladies like Carla Bruni are out there whether they want it or not. But social media gives them control over what they put out and what they say."

"I can devote a little time every day to sharing what I am up to and through reading other people's tweets I've learnt about [things] that I might otherwise have missed."
--Sarah Brown
RELATED TOPICS

Bruni, in turn, dedicates letters to her friends using an A to Z guide on her site: O for Obama (Michelle), B for Brown (Sarah) and M for Madrid, where she details her time with another glamorous first lady, Princess Letizia of Spain.

Bruni's site, in a typically tongue-in-cheek style that has been criticized by some as pretentious, writes: "Three weeks after NATO, the Sarkozy couple's visit to Spain is once more an opportunity to compare the styles of First Ladies. As with Michelle Obama, it is a beauty contest between Princess Letizia, a former star journalist, and Carla Bruni-Sarkozy, ex-top model. From their Louboutin shoes to their Azzedine Alaïa dresses, the essentials are all there."

Meanwhile, Britain's Sarah Brown claims some credit for launching the French first lady into the blogosphere, telling CNN she was flattered when Bruni "complimented me on my blog and responded by starting her own too on her new Web site."

Brown, who tweets several times a day and has 832,596 Twitter followers, told CNN why she loves social media: "I've always thought of Downing Street as a public building with very limited public access. So I have tried to open Number 10 up as much as possible -- through regular charity receptions, film screenings, tours for different groups -- and also through what I do online.

"I'd also been getting a lot of letters and emails asking for more detail about what I was up to day-to-day, and I really wanted to find a way to share ideas, campaigns and causes (and the occasional joke or link) with the people who'd been kind enough to take an interest," she added.

"I've got a Facebook page and do the occasional blog on the Downing Street Web site when traveling officially, but the thing I really love is Twitter. It avoids the commitment of a blog, a full length article or an interview which means it can happen more regularly, and it opens up the opportunity for a dialogue with other Twitter followers.

"I can devote a little time every day to sharing what I am up to and through reading other people's tweets I've learnt about causes and news that I might otherwise have missed."

Brown intends to continue tweeting: "Some people have followed me from my first tweet and they've been so encouraging and friendly. My days just wouldn't be complete without finding out the latest news from them -- about their kids' exam results or the latest story from their daily lives. I've been touched to have a number of followers from all over the world, including a lot of great Americans."

While in a seemingly distant past first ladies' roles may have been limited to smiling for the cameras, Brown and other social queens seem to have found a powerful new platform to carry their own voice across the Web.