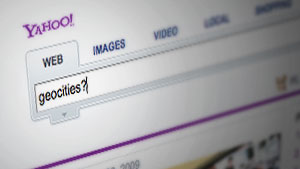 (CNN) -- The flashing banner ads, questionable color schemes and omnipresent "Under Construction" signs of GeoCities are no more.

The personal Web-hosting site, launched in 1995 and owned by Yahoo Inc. since 1999, was to be shut down by Tuesday.

It's a move that will scrub from the Web a significant, albeit dated, piece of Internet history and the pages where millions first tried their hands at coding and designing.

GeoCities, in its heyday, was an online hub for Internet communities, connecting related pages through "web rings" that predated the massive footprints of MySpace and Facebook by nearly a decade.

For some, creating guest books, visitor counters and streaming HTML marquee tags on GeoCities was a stepping-off point into a new digital age.

Carrie Musgrave, a professional photographer from Toronto, said she got two Web-design jobs by showing off her GeoCities creation: a U2 fan page she coded by hand in her college library in 1998.

"There were a bunch of people who applied and they all had computer science degrees," she said of one of her interviews. "I showed them my U2 page and ended up getting the job."

She said she didn't think about the site for years, but after hearing news of GeoCities' pending closure, was surprised to find that her page, where she once got messages from fans thinking it was the band's official site, still existed.

"It's humorous somewhat to go back and look at it -- it's so simple compared to what Web sites are now," she said. "It almost seems innocent."

As the Web evolved, visits to the largely stagnant GeoCities declined sharply and had continued to fall in the months since April, when Yahoo announced the site would be closed.

In September, GeoCities pages had about 10.3 million unique users, according to analysts comScore Inc. That was a 16 percent drop from the 12.1 million they'd seen just a year earlier.

GeoCities was the third most-visited site on the Web in December 1998, behind AOL and Yahoo!, with 19 million unique visitors, according to a CNNMoney report.

In a message Monday on the GeoCities site, Yahoo urged users to try the company's pay Web-hosting service.

In a written statement, a spokeswoman said that Yahoo decided "after careful consideration" to shut down the site.

"We have enjoyed hosting Web sites created by Yahoo! users all over the world, and we're proud of the community that has been built," the statement said. "Yahoo! discontinued GeoCities on October 26, 2009, as part of our ongoing effort to prioritize our portfolio of products and services in order to deliver the best products to consumers."

The statement noted that other Yahoo features, including Yahoo! 360, My Web and Yahoo! Briefcase, have also been closed recently.

"We plan to share details of further changes with people who use our products in the months ahead," the statement said.

Yahoo will not be archiving user pages and has been encouraging GeoCities users to download content to their computers if they want to rebuild them on another site.

The online message notes that the Internet Archive, a nonprofit group trying to document as much of the public Web as possible, was working to record as many GeoCities pages as it could before the site went down.

While many Internet users have long abandoned GeoCities, the Web was filled with nostalgia on Monday. "RIP GeoCities" was a trending topic on Twitter, where one user summed up his feelings in a sub-140-word blast.

"If you're making fun of GeoCities dying," he wrote, "you're too young to understand."