By Cherise Fong, for CNN 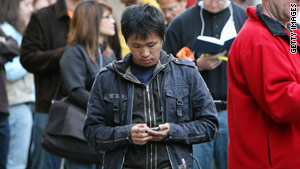 New mobile applications are allowing people to use their downtime to do good.

(CNN) -- The next time you say you want to help make the world a better place, try putting your mobile where your mouth is.

Combining the strengths of mobile technology, non-profit organizations and crowdsourcing (i.e. calling on members of the public to complete small tasks as part of a bigger project, like Wikipedia), new mobile-phone applications are making volunteer work all the more accessible.

The Extraordinaries is one such app, available for iPhone, that targets twenty-somethings who suffer from short attention spans but thrive on instant gratification.

Once inside the free application, users can browse a list of non-profit organizations and their respective tasks, which should take no more than a few minutes to complete.

A sampling of the tasks on offer so far includes tagging images for the Dutch National Archive, photographing defibrillators in-situ for a database of the First Aid Corps and writing words of encouragement to children studying to break out of poverty.

Nonetheless, many of the micro-volunteer "missions" transpire as thinly disguised iReports rallied toward a particular cause in a community. And given the application's relatively unchecked crowdsourcing, accuracy, authenticity and effectiveness remain big question marks in this experimental equation.

Still, The Extraordinaries is an attractive app that mobilizes our desire to do social good, while leveraging a Twitter-like interface to potentially make it trendy and fun.

Do work, give work

One more focused iPhone application is Give Work, a collaborative effort by CrowdFlower, a professional crowdsourcing service provider, and Samasource, a non-profit organization that trains youths and refugees to use computers, and by extension to find sustainable employment.

The micro-tasks found in Give Work (image-tagging, data-categorizing, etc) are all provided by real companies, who renumerate the work through CrowdFlower. Thus, the application creates lucrative opportunity for Kenyan refugees by matching iPhone users' volunteer work with that of the refugees, who do the same tasks and are paid double.

"Though the refugees generally completed tasks at the same accuracy level as CrowdFlower's other vendors, they had a tough time with certain culturally contextual tasks and things that required a more sophisticated grasp of English.

"So our team met with CrowdFlower's developers, and we came up with an idea to build redundancy into the system by getting iPhone users to do the same work as the refugees, tapping the wisdom of the crowd to arrive at more accurate results for clients."

She reports that so far more than 20,000 tasks have been completed, for a total of more than 100,000 points, where the monetary equivalent of 100 points can buy half a fish and a loaf of bread.

Chirayath Janah claims that the program has also had the psychological benefit of making the isolated refugees feel connected to the outside world:

"One of them, a 'lost boy' from South Sudan who was forced to leave his family behind at age 9 and flee to Kenya on foot, figured out how to get on Facebook and send me a friend request after we visited his camp in Dadaab. Three months ago, he'd never touched a computer, and now he's connected via one degree to Mark Zuckerberg."

Giving work even more directly to rural poor people in East Africa is the service txteagle, which allows residents to perform simple tasks via voice call or SMS on low-end mobile phones.

Many of these tasks, such as Nokia's project to train a speech-recognition engine on Kenya's local languages, do not even require literacy, while higher-paying tasks may involve written translations or transcriptions.

Changing the world, one micro-task at a time

"Access to mobile technology is growing by leaps and bounds in the developing world," William Brindley, CEO of NetHope, a non-profit IT consortium of NGOs, wrote in a correspondence to CNN.

"A U.N. study conducted earlier this year found that developing countries now account for about two-thirds of the mobile phones in use, compared with less than half of subscriptions in 2002.

"There are endless possibilities to use [mobile] applications in new and unique ways to connect with individuals living in poverty, so that we can provide them increased access to programs that will improve their day-to-day lives."

Meanwhile social media such as blogs, Facebook and Twitter have proven extremely efficient in spreading the word.

Most recently, the #BeatCancer campaign set a new Guinness World Record for the most mentions (209,771) of the tag in a 24-hour period and raised more than $70,000 from sponsors -- showing that when contributing to the fight against breast cancer is as easy as tweeting #beatcancer, then people will do it.

Another initiative to tap into this bubbling resource of good intention is If We Ran the World, a project that aims to solve the world's problems by matching crowdsourced skills and availability with clearly defined, commercially supported, socially networked "micro-actions."

Of course, while the project assumes that every great cause can be broken down into discrete micro-tasks on an individual level, the most effective of these mini-missions will most likely require real-world action beyond the realm of our mobile touch-screens.

On the other hand, perhaps it won't be long before our smart-phones become our default point of entry into a growing network of social change on a global scale.