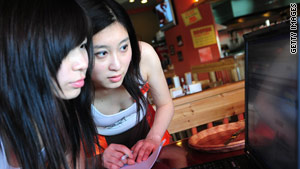 Opening up the Internet: Chinese, Cyrilic, Arabic and others may soon appear in URLs.
STORY HIGHLIGHTS
RELATED TOPICS

(CNN) -- The group that controls top-level domain codes for Internet addresses is poised to permit non-Latin language codes for the first time in its history.

"It's the single biggest change in 10 or 15 years," said Rod Beckstrom, CEO of the Internet Corporation for Assigned Names and Numbers.

The board of directors of the International Corporation for Assigned Names and Numbers (ICANN) will vote on the proposed protocol for Internationalized Domain Names (IDNs) -- those represented by local language characters -- Friday at its meeting in Seoul, South Korea.

The change, which has a target implementation date of November 16, would allow Web addresses in Cyrillic, Arabic, Hindi, Chinese and others.

"This is one of the most exciting developments for the users of the Internet globally in years," said Beckstrom. "IDNs will enable the people the world over to use domain name addresses in their own language."

Beckstrom said support for the change is strong around the world and that all objections had "been handled."

"So I think it's just extremely probable, and we're really excited to move forward with that," he said.

And if, as expected, it does move forward, it means that Web surfing is about to get easier for about half of the world's 1.6 billion Internet users.

"There are over 40 million users in the Arab world," said Wael Ghanim, Google's product and marketing manager for the Middle East and Africa, "and this number is expected to increase in the coming days, which in turn makes the Arabic language one of the strategic languages through which a lot of companies, for instance Google, are interested in."

But some worry that the change could lead to more miscommunication.

But others see the IDNs opening the Internet to a much broader population.

"If they can make this technology work, and people can use their own language to enter in addresses, I think that that would really expand the practical applications of the Internet," said Chinese Internet cafe owner Zhang Zhiming.

"People from different walks of life and different age groups could get more engaged with it."

One question that has not yet been resolved, however, is how people in countries that use the Latin script will be able to access Web sites with Korean, Hindi or Arabic domain names.

ICANN doesn't have an answer to that, but is confident a new technology will fill that gap soon.