A trip into the secret, online 'cloud' 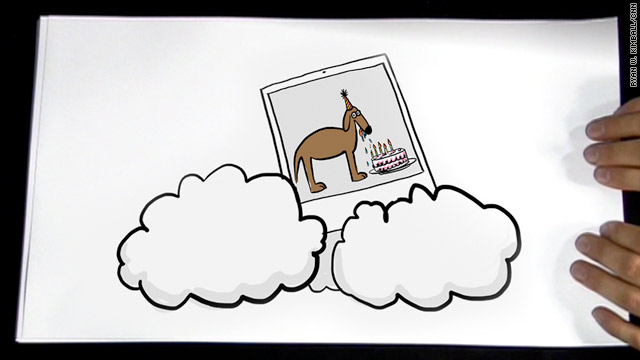 San Jose, California (CNN) -- One day, while uploading yet another text file to the Google Docs Web site, I started to wonder: When I save this file online, where does it actually go?

I store tons of information on the Internet instead of just on my laptop or work computer. Often, I do this specifically so I can access information from both places, or from my mobile phone if I need it on-the-go.

Without realizing it, I'd started cloud computing, that nebulous term that refers to the idea that computing power is moving off home PCs and laptops and onto the Web.

I keep thousands of photos on Flickr. I've also got them on Facebook and tucked away in five years of Gmail messages. My videos are on 12seconds and YouTube (including a really embarrassing one of me landing on my face during a college diving meet). I've blogged from Madagascar on Blogger; my tech writing is on WordPress; and I post random snippets of info on Tumblr and Twitter.

This is not just data. It's my life. And I would be sick if I lost it. Previous generations stored their family photos and important documents in safety deposit boxes or under the mattress. Here it is 2009, and I have no idea where my data lives.

I was curious and I wanted to find the scattered bits of my online life before dumping everything on my laptop onto the Web.

So I decided to go on a scavenger hunt into the cloud.

Before I started the search, when I thought about cloud computing, this is the image that came to mind: a giant cartoon cloud just slurped information off of my computer like magic. My files just floated in the sky until I wanted them back.

Video: What is cloud computing?

The cloud doesn't work like that. It's made up of a massive and growing network of data centers, which are huge warehouses full of computers. They store and process information from all around the world, largely in secret.

Read about how the cloud is similar to electric utilities

I found it shocking that the gut of the cloud, an image I found so soft and quaint, was actually comprised of an enormous and ever-growing network of machines.

But apparently lots of people already knew this.

"All the clouds live in data centers," Rich Miller, editor of a prominent cloud-computing blog called Data Center Knowledge, told me. "There's always hardware involved, and bricks and mortar. ... It's not a fluffy cloud. It's living in someone's building."

Awesome. So all I needed to do to find my family photos and the rest of my data was to call up the data center where it lives and go there, right?

Wrong. I quickly learned tours of the cloud aren't easy to come by.

It's not a fluffy cloud. It's living in someone's building.
--Rich Miller
RELATED TOPICS

Amazon, which has turned into a major player in cloud computing, declined to give me a tour of one of its centers. Adam Selipsky, vice president of Amazon Web Services, seemed to want to preserve the cloud's aura. "From a customer's perspective," he said, "it is a cloud, and it can be magic."

Google, which has most of my sensitive data, like e-mail, calendars, to-do lists and documents, declined an interview request for this story. A spokeswoman said the company doesn't give tours either. Go figure.

Dismayed, I started turning to companies who don't have my data, just hoping to get a sense of how this system worked. IBM offered to give me a tour, maybe because, like me, it's trying to break into the cloud world.

A walk in the cloud

It seems like the last place you would go on a quest to find computer files would be a valley full of farms and cows.

But that's where this search took me.

In the hills outside San Jose, California, across the street from a farm that sells pumpkins and corn this time of year, IBM runs a cloud-computing center that's nearly the size of a football field. It's in a metal building that's part of an office complex.

Inside, I found rows of black, refrigerator-sized computer towers, 4,000 of them in all. They buzzed and whirred so loudly that I had to lean in to hear my tour guides. In front of the towers, grates and pinholes in the floor pump out frigid air to keep the machines from overheating. The computers breathe this air in and then exhale air as hot as a hair dryer's.

Inside each computer rack, about a dozen individual machines, each shaped like a pizza box, are wired together. Some process data. Others store it. Marty Yarnall, one of IBM's data center advisers, said one of these flat computers, called "blades," has the computing power of about 50 personal laptops.

In all, this center stores more than 1 petabyte of data, or billions of healthy-sized photos files. I imagined all of my cloud data shimmying through these machines, having plenty of room to stretch out and have billions of cloud-data children.

As impressive as the size of this place is the fact that the files stored here have some serious jet legs. Some data here is accessed primarily by people in India and China. When people in these far-flung offices save files in this data center, lightning storms of orange LED's flicker up and down the computer towers almost instantly.

As I walked around the center, IBM employees did their best to explain this hyper-complicated system. They rattled off machine types, specs and technical details faster than I could write them down.

I confess that I left the IBM tour not feeling much better about the safety of my data. Not that there seemed to be anything wrong with their cloud computing center. The IBM staff was friendly and helpful. The machines looked nice.

But I don't have an IT degree.

How would I know if this place is working or not?

Trust what you can't see

When I arrived home in Atlanta, Georgia, I got on the phone to continue pressing the Web sites I use to tell me where and how they store my data.

Some gave small details: Facebook told me it stores my party photos and status updates on servers in Virginia and in the San Francisco Bay, for example. Tumblr stores my random blogs in Austin, Texas, and in New York before casting its blog posts to Amazon's network on the West Coast.

I learned some companies, like Microsoft and Amazon, replicate data several times, on servers around the world. They scatter it all over the place so as not to lose it. Data moves around both within cloud centers and from one data center to another, often crossing oceans and trekking continents to get there.

Some of these cloud companies employ armed guards, retina scans and "man traps," where doors lock on both sides of would-be entrants before letting them inside.

Many companies, like Amazon, said nothing specific, citing security concerns and competitive advantage.

On one hand, I was annoyed. I thought my search was finished.

But the more I mulled over my failing scavenger hunt, the more I thought that maybe I was asking the wrong question. Perhaps it doesn't matter where my data is, just that there's some way for me to get a sense of how well it's managed.

Still, without information, it's hard to know who to trust.

That makes it easy to fall back on flimsy methods of comparison, like going with a brand you already know. I'm sure this is how I ended up with so much data on Google's servers. It's a huge company. Billions use their search. Tens of millions save files with Gmail. They've got to know what's up, right?

That's exactly what the big cloud companies hope you will think. Microsoft's general manager of Windows Live, Brian Hall, told me brand recognition is the best way for people to compare services.

Having left the cloud, I tried to navigate my way through this new fog. I kept looking for other ways to check up on my data without visiting it.

I thought about what I want in a cloud service. I want my data to be available all the time. And I don't want there to be any chance the company could lose it, a tricky request since the hardware that stores our data is designed to fail from time to time.

Google and Amazon both guarantee their paid cloud services will be up and running 99.9 percent of the time, and they offer service credits to make up for failures. The only problem is that these types of agreements, for now, only apply to paid services. Too bad for my free Gmail account.

"Terms of service" agreements offer some details on free services. But, after reading several, it's still unclear to me who owns my data, if I can ever delete it from some sites and what would happen if any of these companies goes bankrupt. In response to an e-mail question about what would happen to Facebook data if the site closed, a company spokeswoman wrote, "The business is doing well and continuing to grow."

Lastly, on my tour in San Jose, when I felt the heat coming off the computer towers, I started to wonder if there's a way to compare one data center's energy efficiency to another's.

There has been some progress in this area. The U.S. Environmental Protection Agency and an industry group called The Green Grid are trying to compare the green records of these centers and cloud companies.

For now, I think I'll hold off on dumping my whole laptop onto the cloud.

But I'll keep using it as back-up. I saved drafts of this story, and my research, on a cloud storage site called Dropbox. That made it easy to work from my office in Atlanta, my tour in California and from my apartment.

I'm going to continue storing data on my laptop, and, since I know my laptop can break (it's happened before), I'll probably keep backing it up on an external hard drive or on DVDs when it's something really important, like my travel photos or those of family.

I conclude my journey a bit disappointed. I still wish I could have found my Google docs, Blogger posts or YouTube videos in the real world.

But, on my quest, I did get a sense that the haze around the cloud is starting to lift.

Google, for instance, recently posted a video tour of one data center online. That's a good sign because it means consumers may soon have logical ways to compare cloud companies.

The most important thing I realized on this search, though, was rather basic:

The cloud is not some fluffy ball of magic, it's an energy-sucking and fallible machine.

One I'll be more cautious before trusting.