Solar gadgets for when you're on the go 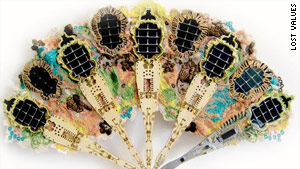 Be a real fan of solar with Lost Value's portable fan-shaped light.

(CNN) -- When it comes to sun energy, the focus is often on solar power plants or rooftop panels. But there's an increasing number of snazzy portable products that also draw juice from our nearest star -- things we can carry, wear or set on our desks.

Of course calculators and alarm clocks have been solarized for decades, although they've often lacked design cred. And some observers think that green marketing is behind many of the new solar products as much as anything else.

"Honestly a lot of it is marketing gimmick," says Ted Sullivan, a consultant with Lux Research.

"There's certainly some value in these products, but most of them are not self-sustaining like you would find from the calculator, which has incredibly low power consumption."

Still, the trend is hard to miss. Solar gadget-chargers in particular have proliferated, driven by increasingly mobile lifestyles and growing green awareness. They're sold as stand-alone devices or come integrated into cases, bags or clothing.

One of the earlier stand-alone chargers, the Solio Classic, was introduced about five years ago by a small California company called Better Energy Systems.

An amusing gallery of user photos on the Solio Web site shows the charger in use out in the wild, such as strapped to the outside of a skier's backpack, along with the iPod it's charging, up in the Himalayas.

A twist on the portable solar charger is the addition of a miniature wind turbine, as seen with the Kinesis K3 device from Kinesis Industries in Arizona.

Attached to a bike, it can capture wind energy on your way to the beach, and then solar energy once you're there. The company suggests charging up the device through a wall socket first, and then using the wind and solar energy to keep it topped up. That advice would apply to many such chargers.

Another approach is to put a gadget in a solar casing. A California firm called Novothink has introduced Apple-certified protective cases for iPhones and iPod Touches that have solar panels on the back.

One challenge with consumer electronics, notes Sullivan, is that they're usually carried inside dark pockets, bags and cases. A solution to that is to put the solar panels on the exteriors of the clothing and bags, and then link them to a battery within that can charge devices.

Companies offering solar bags and cases include Voltaic Systems in the U.S. and Neubers in Germany. Such products are among the more practical consumer solar offerings.

"If you're sitting in a park all day under a good amount of sun and need to charge your cell phone, that's a viable option," says Sullivan, noting that the Voltaic bags for instance have relatively efficient cells and a flat form factor for capturing more sunlight.

Some bags are suitable for carrying laptops, but not necessarily efficient enough for powering them in a practical timeframe. Voltaic claims its $499 Generator case can do the job.

Generally, though, the bags are meant to charge small devices like cameras, cell phones, and MP3 players.

Some gadgets can grab their own sunshine, such as a solar e-book produced by LG Display in South Korea. And last month Samsung launched Blue Earth, a fully loaded eco-hip smart phone made from post-consumer materials. It has an energy-saving mode and an integrated solar panel on the back.

While expecting the solar panel to instantly recharge the phone from a dead stop might be unrealistic, Sullivan says Blue Earth is "a step in the right direction."

Solar chargers have worked their way not only into sportswear, but also into more fashionable items as well. For instance Zegna Sport's Ecotech solar jacket sacrifices no sleekness to attain its eco-worthiness. Solar panels on the sleeves connect to a detachable lithium battery on an inside pocket that can either charge devices or heat the collar.

Founder and fashion designer Elena Corchero took note of the solar backpacks and jackets, but she wanted to "explore the aesthetics" in a way that would respect textile traditions and "camouflage the solar cells into designs that could be part of our everyday, without having to shout technology wherever you go."

She also paints interesting similarities between the evolution of the clock and the solar panel. Just as the former went from our walls to our wrists, the latter will go from our rooftops to our wardrobes and everyday lives.

A San Francisco company called Regen sells LED desk lamps and iPod speaker docks that tap solar energy. Inside the home a nearby power outlet would also work, but the products give customers both flexibility and a cleaner green conscience.

Not everything needs to be so practical, of course. There's room for whimsy as well. "Solar night flowers," sold at online stores like Cozydays.com for about $30, draw energy in the day so they can shine tackily at night.

And one of Sullivan's favorites, he says, can be found in markets in Seoul: solar-powered bobble-head toys.

Bobbing the head of a toy might seem like a waste of energy, but at least it's free energy. Anyone focused on larger issues, like how solar farms can challenge the traditional power establishment, might scoff at consumer toys, accessories, and gadgets.

But these products might also boost solar power in the minds of consumers.

When the Solio charger came out, says Better Energy Systems spokesperson Christa Kaufmann, "people responded with great enthusiasm and became much more open to the concept, and use, of solar. That was very much built into our thinking."