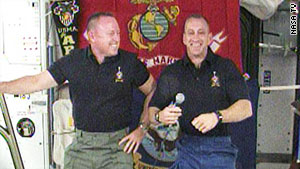 (CNN) -- Astronauts aboard the international space station and space shuttle Atlantis woke up to a worrying sound -- alarms indicating a fire and dangerous loss of pressure, NASA said Friday.

However, a check revealed no serious trouble.

Depressurization-caution alarms sounded just after 8:30 p.m. ET Thursday, waking the shuttle and station crew, NASA said. The flight control teams on the ground determined there was no depressurization and shut off ventilation fans.

The crew was never in any danger, NASA said, and teams on the ground are looking into the cause of the false alarm.

Flight control teams at Mission Control in Houston, Texas, were bringing the station back to normal soon after the alarms, but it was 10:15 p.m. by the time the crew was able to go back to sleep because they had to wait for the station's ventilation system to be reactivated, NASA said.

Crew members go back to work Friday when they'll be focusing on preparations for Saturday's spacewalk, NASA said. They'll have to recharge batteries, switch out spacesuits and review procedures.

They also will use the shuttle's robotic arm to grab a second cargo pallet of spare equipment Atlantis brought up in advance of its transfer to the space station Saturday, NASA said.