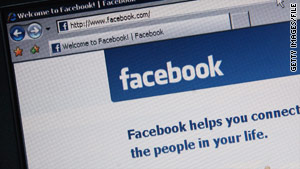 "We believe that the only way to keep kids safe online is for everyone who wants to protect them to work together," Elliot Schrage, a Facebook vice president, said in a statement Sunday.

"The formation of a board to advise specifically on safety issues is a positive, innovative and collaborative step toward creating a more robust safety environment, and we are thrilled that such a well-respected, trusted group of organizations has joined us in this endeavor."

Making up the advisory board are Common Sense Media, ConnectSafely, WiredSafety, Childnet International and the Family Online Safety Institute.

Facebook's announcement comes less than a week after it added new privacy features, including the ability for users to select who can see each post made to the Web site.

The highlight is deciding which Facebook friends see updates, photos or other posts at the time they're posted -- "something many of you have asked for," Facebook founder Mark Zuckerberg said.

"In addition, we'll also be fulfilling a request made by many of you to make the privacy-settings page simpler by combining some settings," he said.

A letter on the Web site said that, in the next couple of weeks, Facebook's roughly 350 million users will be asked to review and update their privacy settings. A message on the site will explain the changes and take users to the page where they can update the settings, Zuckerberg said.