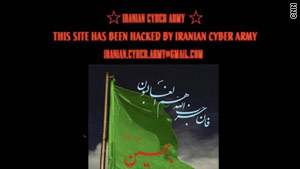 People who tried to access Twitter early Friday were redirected to a Web site from the "Iranian Cyber Army."
STORY HIGHLIGHTS
RELATED TOPICS

(CNN) -- The popular microblogging site Twitter was hacked briefly by a group calling itself the Iranian Cyber Army, but the site was quickly restored after the incident early Friday.

Those who tried to access Twitter were redirected to a site displaying a green flag and proclaiming, in English, "This site has been hacked by Iranian Cyber Army." The group's Web address was provided.

Arabic writing in blue said, "Hezbollah is victorious," and a message on the flag said, "Ya Hussein," referring to Prophet Mohammed's grandson.

The United States and Israel categorize Hezbollah, a political party in Lebanon, as a terrorist organization.

"The group claiming responsibility for the Twitter hacking is previously unknown, but its symbols would be familiar to anyone looking at radical (Web) sites," said Octavia Nasr, CNN's senior editor for Middle East affairs.

"The hackers are definitely Shiites, as indicated by the 'Ya Hussein' chant printed on their banner," she said.

"The group also uses Arabic in their text, a clear indication of collaboration with Arabic groups. Hezbollah is a Lebanese Shiite militia with ideological, political and military ties to Iran. The same name is also used by a group inside Iran."

"In the past few years, we've been seeing a rise in desire for hacking by insurgents and terrorist groups," said Nasr. Not only do they hack outside sites, but they hack each other's, she said. "The idea of 'cyber terrorism' and 'cyber insurgency' has been manifested in many ways -- (with) hacking individual sites being the most infamous."

She added, "This week's (revelation of) successful hacking of U.S. predator drone feeds by Iranian-backed Shiite militants adds another level of sophistication toward the hacking effort."

When Iran's disputed presidential election spiraled into bloody protests, the opposition used Twitter and other social networking sites to inform the world.

Protesters beamed images from the violent demonstrations at a time when mainstream media were given almost no access to the demonstrations.

Twitter became so fundamental in spreading news of the protests that the U.S. State Department asked the company to delay a planned shutdown for maintenance.