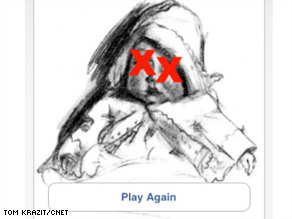 Baby Shaker was "deeply offensive and should not have been approved for distribution," Apple statement says.

Just hours before the App Store offers up its 1 billionth download, Apple was forced to acknowledge that perhaps the most notorious iPhone application ever constructed was "deeply offensive" and a "mistake."

Baby Shaker appeared on the App Store Monday, and was pulled Wednesday after a media frenzy grew following the discovery of the application by the founder of a shaken baby syndrome foundation.

Apple's statement follows in its entirety:

"This application was deeply offensive and should not have been approved for distribution on the App Store. When we learned of this mistake, the app was removed immediately. We sincerely apologize for this mistake and thank our customers for bringing this to our attention."

However, in practice, Apple has chosen to wield its rejection stamp in confusing and sometimes contradictory ways.

Applications have been banned for containing off-color language. The creators of South Park were not allowed to sell their application because of "potentially offensive" content, despite the fact that the show's episodes are available in the iTunes Store.

And Apple has rejected applications that appear to compete with its business interests while approving applications submitted by well-connected friends that break App Store rules.

Apple's decision to play App Store gatekeeper has forced it into what might be an unsustainable position.

If the volume of submissions to the App Store continues to grow -- there are now more than 35,000 applications currently on the store, Apple executives said Wednesday -- Apple will be forced to employ an army of application inspectors who will not only have to scour each app for technical quality, but make content-related decisions based on criteria Apple has yet to disclose.

Sikalosoft, the company that created Baby Shaker, has not responded to e-mails requesting comment on the application as well as the approval process, and whether or not Apple raised any objections to the application during that process.

Macworld noticed that Sikalosoft has posted an early candidate for Understatement of the Year on its new Web site. "Okay, so maybe the Baby Shaker iPhone app was a bad idea."

The rest of the site is devoted to information about Shaken Baby Syndrome. Alex Talbot, who appears to be the developer behind Baby Shaker, has still not responded to e-mailed requests for comment on the application.

All About Apple Inc.