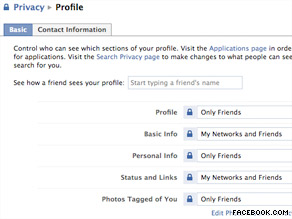 Users will be introduced to the new controls through "transition tools."

The social network's privacy controls had gotten so sprawling that they were distributed across six separate pages and 40 different settings, according to a conference call the company held on Wednesday.

"These can add up and pile up and not be as clean as one would like," Facebook chief privacy officer Chris Kelly said on the call.

As a result, Facebook's new controls will be more streamlined so as to offer easier and simpler controls about how much everything from entire profiles to individual pieces of content are shared.

Users will be introduced to this through "transition tools" that allow them to toggle how open everything on their profile will be -- totally public, friends-only, restricted to company or school networks, etc.

One of the biggest changes along with the new controls is that Facebook is getting rid of "regional networks," the opt-in way that members could designate themselves as residents of certain geographic areas.

Only half of members even joined these networks, according to Facebook. It's a change that's been anticipated for some time, and privacy controls regarding regional networks have already been phased out.

"Networks were kind of the bedrock of privacy," product manager Leah Perlman said on the call. "When we expanded past college and work (networks), we created the concept of regional networks in order to have our privacy model expand."

Members could share content selectively with members of their regional network, but representatives said that it was never quite clear as to exactly who else was in that regional network, and the delineation of networks was messy -- some were defined by city, other by broader region or state, and others encompassed entire countries.

There were, for example, separate networks for each of New York's five boroughs, but most residents just chose to join the broader "New York, NY" one instead.

Facebook says that this shouldn't affect locally targeted advertisements: the company will be porting regional network data to its "Current City" field, and has already been using other data like IP address information to hone local ad targeting.

The "publisher" will now have a privacy toggle for individual pieces of content, letting a user choose whether to make them available to friends only, custom friend groups, or -- for the first time -- to the Web at large. Making content available publicly will bring Facebook better in line with the thirst for real-time, searchable mass information that Twitter has captured so effectively thus far.

So how will this be handled? Facebook members will be guided through one of the aforementioned "transition tools," which representatives said will take one of two forms: either an ultra-specific set of granular, custom controls or a more no-brainer set of radio buttons.

The new controls will first be tested with 40,000 users in the U.S. before rolling out to a bigger, international group of beta testers and then worldwide.