AT&T takes the phone out of iPhone

(CNET) -- Three weeks ago, I got a call on a friend's iPhone while in the middle of a desert; cell phone coverage had come to Burning Man. 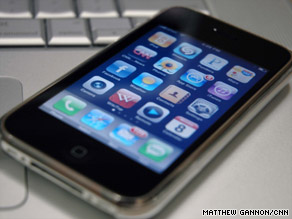 "We lead the industry in smart phones," an AT&T spokesman said, explaining the high demand for service.

By contrast, several calls I made last night to my parents from my San Francisco, California, apartment were dropped and a subsequent connection became garbled.

That happens daily when I try to converse on my first-generation iPhone in my apartment and in certain other neighborhoods. I've come to anticipate that if I can even make a call it's likely to be short-lived or poor quality.

Frustrated by the numerous interrupted calls, I decided to try to find out why my iPhone service is so poor that it's easier to have a Web video conference over AIM with my boyfriend because neither of us can use our iPhones (his is 3G) reliably inside either of our homes.

This is not a new problem. AT&T was criticized when traffic from attendees at the South By Southwest conference in Austin, Texas, overwhelmed the network earlier this year. And there were widespread complaints about dropped calls and spotty service after the launch of the iPhone 3G a year ago.

I wondered why, a year later, the service still seemed unreliable. I called AT&T (on my reliable land line at work) to find out. AT&T spokesman Mark Siegel blamed the problem on the increasing amount of data traffic iPhone users are creating, which CNET News and others wrote about earlier this month.

"We lead the industry in smart phones," he said. "As a result, we are having to stay ahead of what is incredible and increasing demand for wireless data services."

I wanted to know specifically why my problems haven't been resolved nearly one-and-a-half years after getting my iPhone and why my voice reception would be impacted by data traffic on a different network. "Well, it wouldn't," Siegel conceded.

Initially, he had suggested that my problems were related to the fact that the first-generation iPhone uses the EDGE data network, which is slower than the 3G network. However, not only am I on a different data network than the 3G data bandwidth hogs, but there should be no connection between general data usage and my voice reception.

Other factors are at play, though, such as proximity to a cell tower, the thickness of walls in the building and amount of demand on the network at the time, according to Siegel.

Asked what AT&T is doing to address the reception problems, Siegel said the company is rolling out 850 MHz frequency, which penetrates walls better than the higher frequency 1900MHz band; adding 2,000 cell towers to increase coverage; beefing up its back-haul capacity that connects the cell towers to the Internet; spending as much as $18 billion this year to upgrade its wireless and broadband networks; and moving to the LTE, or 4G, network standard known next year.

"We recognize unique challenges have been posed by all of these smart devices being increasingly used by more and more people and I think we are on the forefront of architecting our network to continue to stay ahead of the demands that those devices place on our network," he said.

Despite listing the improvements AT&T plans to make, Siegel kept insisting that there was no story here; that my concerns and the many comments on the Apple iPhone forums about reception problems and dropped calls was not newsworthy.

While I do have friends who report no problems with their iPhone reception, many of my friends have complaints. I did an informal survey of friends on Facebook and learned that people suffer from dropped calls, as well as inaccessible voice mail and delayed voice messages.

Also, I am not alone in being forced to cut back on talking on the phone as a result of the reception problems. Here are some examples of the responses I got:

• "As soon as I move and do not have an AT&T bundle, I am throwing the iPhone, and AT&T in the trash," wrote a San Francisco friend using a first-generation iPhone.

• "When I first got my iPhone (July 2007), I had fine coverage. In the past nine months or so, something changed. Now I have *horrible* reception in my neighborhood, especially in my apartment, and most especially in my bedroom.

My phone virtually never rings there, and I almost never get voicemails or text messages until somewhere between 2 minutes and 2 hours after the communication went through," wrote another first-generation Bay Area iPhone user on Facebook.

• "I've come to use it as a portable computer and a phone only in emergencies. I hardly talk on the phone anymore," another Bay Area friend who has a 3G iPhone told me.

• "My (3G iPhone) won't work inside my house. I'm thinking about selling my house and finding a new one. Until then, I just use the forwarding feature, but it's a pain. And yeah, it means I tend to talk on the iPhone less. It's definitely a problem with my line o' work, although I'm trying to use Google Voice to solve the problem, too," wrote a friend in Arizona.

Siegel was not amused.

"So you are actively asking folks to submit their experiences? Sorry, but you and I have a basic disagreement about why you are doing this story. What is the news here beyond what others have covered?" he wrote in an e-mail.

Maybe I should pose that question to all the iPhone users who can't make a basic phone call with their phones much of the time.

Siegel said he would look into my particular situation. I hope he does and if so, I'll let you know what I find out.

While I can't speak for other parts of the country, there do seem to be problems in San Francisco at least. This is significant given the high percentage of iPhone users in the area.

All About Apple iPhone • AT&T Inc.