Should I buy the extended warranty? 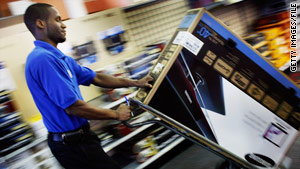 An extended warranty is nothing compared to how long TVs are guaranteed to work.
STORY HIGHLIGHTS
RELATED TOPICS

(CNET) -- It's getting to be that time of year again: The leaves change, the temperature drops, and we redecorate our living rooms, desks, cars, and backpacks with shiny new electronics.

A recent survey by the Consumer Electronics Association found that respondents plan to spend, on average, $222 each on gadgets this holiday, an 8 percent increase over last year. And among teens and adults, computers and video games are the most wished-for items this year after clothing.

One of the grand traditions that goes along with buying electronics is being asked at the register, "Would you like to purchase the extended warranty?"

Some will always say "No" out of principle, while others are torn by the snap decision it requires.

Here are some things to consider this season when it comes to extended warranties on consumer electronics like laptops, TVs, cameras, MP3 players, and more.

I always get asked to buy an extended warranty. Is it worth it?

It depends on what you buy, what the standard warranty covers, and the cost of the service. But for most people, no.

There are several things to consider: The standard warranty that comes with electronics covers parts for one year and labor for 90 days. And certain devices often come with more, like hard drives or TVs.

A year is going to be plenty of coverage for most electronics, so make sure you know what the manufacturer will cover before considering paying for extra coverage.

The extended warranties often offered by retailers, which cover parts and service normally for up to two or three years after the standard warranty expires are basically pure profit for them, and it never hurts them to hit you up after you've just laid out a lot of money. But it usually doesn't make sense for most customers for several reasons.

First, the majority of gadgets won't ever need to be repaired -- though retailers and device makers don't usually share statistics about how often they break, Consumer Reports has done studies and found that 3- to 4-year-old gadgets don't need repair all that often.

Three to four years is also a really long time when it comes to technology now. And as the cost of laptops and desktops, for example, continue to decline, sometimes the cost of replacing the device isn't that much more than getting something new. More on that later.

Second, the price of the warranty may be as high or higher than the device itself. Obvious example: If you're asked to buy a $30 warranty on a $50 calculator -- you should probably just take your chances.

Third, sometimes the cost of a one-time repair is equal to the cost of the extended warranty. If you need to repair the hard drive on your $1,000 laptop, for instance, paying $150 or $200 out of pocket one time makes more sense than paying the $280 Best Buy is currently asking for its Geek Squad Black Tie Service.

Last, if you buy an item on a credit card, find out if the credit card company offers any additional warranty protection, which is fairly common. In some cases they'll double the standard warranty period at no extra cost to you.

But aren't warranties a no-brainer for big-ticket items?

If you're really unsure about the brand you've chosen, then perhaps yes. (Although maybe you should reconsider your purchase if you're that worried.) But for items like televisions, traditionally an item that is expensive and gets a lot of use, a lot of experts would actually say, "No."

Though it's been common for people to consider flat-screen TV technology new and untested, that doesn't hold true any longer, notes CNET's in-house TV expert David Katzmaier. Plasma and LCD are well-tested, and are reliable technologies to the point where breakdowns are rare, he points out. And if the TV you bought does turn out to be a lemon, the manufacturer's warranty is usually sufficient.

Plus, a two- or three-year extended warranty is nothing compared to how long TVs are guaranteed to work. Plasma and LCD TVs are rated to run at full brightness for 60,000 hours, or more than 10 years.

But if you break that down, it's actually longer when you consider how people actually watch TV, Katzmaier says. The average TV is not running for 60,000 continuous hours. If you guess it's on for about 5 hours per day, 60,000 would actually cover more than 30 years.

And, Katzmaier points out, the "lifespan" spec is just how long until the panel fades to half brightness, not until it no longer works properly.

OK, but what if I'm a worrier?

Then just get it. Sometimes the extra $200 to $300 is worth the peace of mind. There is definitely a case for buying insurance on something you've spent a lot of money on that you might not be able to afford to replace, should something go wrong a couple years down the road.

It also might be a good idea if you can't afford to go without the item in question, as The NPD Group's electronics retail expert Stephen Baker noted.

"You can make a pretty good argument today that given how important consumer electronics are to (people), that buying insurance, or a warranty, on them is pretty important because you don't want any down time," he said. "It's the same reason you by a warranty on a refrigerator or an oven: You don't want to be without that product for one minute."

For a lot of people, that could be true if we're talking about a laptop or any computer. And in that case you have options: You can buy the extended warranty from a retailer, or you can get one from a third-party seller.

Some of them, like ElectronicWarranty.com, which sells extended warranties, include the option for a loaner laptop, which they will ship overnight if you absolutely can't be without a computer while it's being fixed.

Another thing to consider: If you don't want to or don't have the means to take something in for repair, extended warranties can be helpful. Some programs will include in-home service contracts, so the technician comes to you instead of you hauling the device into a store or repair shop. This might cost a bit more, but it might make sense if you live a long way from the place that does the repairs.

Apple's AppleCare program, for example, isn't cheap by any means, but it does allow customers to have a repair consultation over the phone after the 90-day complimentary period expires for no additional charge. Otherwise there's a charge to speak to a representative instead of taking the item into an Apple Store to make an appointment for service.

So while peace of mind is priceless for some, for others the extra cost of a warranty won't make sense. While we don' think many of them are worth it, there are always going to be exceptions, and ultimately it's up to you.