(CNN) -- Tiny diamonds found in the soil are "strong evidence" a comet exploded on or above North America nearly 13,000 years ago, leading to the extinction of dozens of mammal species, according to a study. 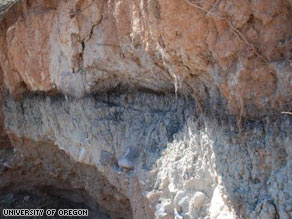 Diamonds found in North American soil suggest a comet led to the extinction of dozens of mammal species.

The scientific report also suggests the cataclysm also reduced the population of the earliest people to inhabit the region and triggered a 1,300-year-long cold spell that stretched around the world.

The heat generated by the extraterrestrial impact likely melted much of a glacier that once covered the Great Lakes region, sending a massive flood down the Mississippi River, the study said.

According to the report, the cold waves of glacial runoff into the Gulf of Mexico shifted Atlantic Ocean currents, changing climate patterns throughout the world in a cooling period known as the Younger Dryas.

"A rare swarm" of comets rained over North America about 12,900 years ago, sparking fires that produced choking, leading "to the extinction of a large range of animals, including mammoths, across North America," the report said.

The study was conducted by a group of eight archaeologists and geologists from the universities of Oregon and California, Northern Arizona University, Oklahoma University and DePaul University. Their findings were published Friday in the journal Science. iReport.com: Have you ever seen a comet? Show us

The prehistoric humans known to have inhabited the continent at the time of the event -- hunters and gatherers dubbed the Clovis culture -- suffered a major decline in population in the aftermath, the scientists said.

The scientists studied layers of sediment dated to 12,900 years ago at six North American locations, including one directly on top of a Clovis site in Murray Springs, Arizona. Each layer was rich in nanodiamonds, which are produced under high-temperature, high-pressure conditions created by cosmic impacts, the report said.

"The nanodiamonds that we found at all six locations exist only in sediments associated with the Younger Dryas Boundary layers, not above it or below it," said University of Oregon archaeologist Douglas Kennett. "These discoveries provide strong evidence for a cosmic impact event at approximately 12,900 years ago that would have had enormous environmental consequences for plants, animals and humans across North America."

The other sites studied were in Bull Creek, Oklahoma; Gainey, Michigan and Topper, South Carolina, as well as Lake Hind, Manitoba; and Chobot, in the Canadian province of Alberta.

All About Nature and the Environment • Earth Science