(CNN) -- Shark attacks on humans were at the lowest levels in half a decade last year, and a Florida researcher says hard economic times may be to blame. 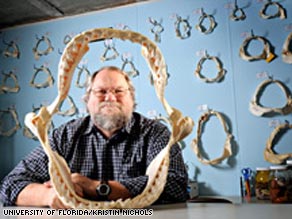 Sharks attacked 59 people in 2008, the lowest number of attacks since 57 in 2003, according to George Burgess, director of the International Shark Attack File, part of the Florida Museum of Natural History on the University of Florida campus in Gainesville.

"One can't help but think that the downturn in the economy played a part in it," Burgess said.

Fewer people, especially outside of the United States, have the resources to go to the beach, he said.

"We noticed similar declines during the recession that followed the events of 2001, despite the fact that human populations continued to rise," the ichthyologist said.

Sharks killed four people in 2008, Burgess said: one in California, one in Australia and two in Mexico.

Forty-one of the 59 attacks worldwide came in the United States, and 32 of those occurred in Florida.

Surfers accounted for 57 percent of shark attacks, swimmers and waders were the targets in 36 percent of the attacks, and divers the rest, he said.

Burgess said the U.S. tends to see more attacks because of a large number of surfers, who are a favorite target of sharks.

And neither the economy nor the attacks tend to keep American surfers from practicing their sport.

"All they have to do is drive to the beach with the board and get into the water, and the rest is free," he said.

And while an attack may make them a bit more wary, he said, "I've yet to find a surfer who says he or she won't go back into the water after a bite or a nip."

When the economy improves, shark attack numbers are likely to go up again, according to Burgess, predicting the number of attacks in the next decade will surpass those of the past 10 years.

"We're putting so many people in the water that humans are dictating the shark attack situation," he said.

All About Sharks and Rays • Florida • Marine Animals