(CNN) -- You had a close encounter with a 40-yard-wide asteroid this week, but the astronomer who first spotted the large rock said it's nothing to worry about. 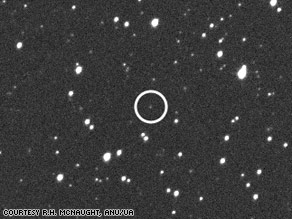 An asteroid (inside circle) passed within 38,000 miles of Earth on Monday.

Asteroid 2009 DD45 on Monday passed within 38,000 miles of Earth, less than twice the height of the geostationary satellites we depend on for communications, according to Robert McNaught of the Australian National University.

McNaught, who watches for asteroids with his telescope 250 miles northwest of Sydney, Australia, discovered the approaching rock last week.

While a direct hit on Earth could be a devastating natural disaster, McNaught said keeping track of asteroids can make a hit "potentially preventable."

"If discovered in advance and with enough lead time, there is the possibility of pushing it off course, if you have decades of advance warning," McNaught said. "If you have only a few days, you can evacuate the area of impact, but there's not a great deal [else] you can do."

In either case, he said, a global catastrophe as depicted in Hollywood movies such as "Deep Impact" is "very, very unlikely."

The 2009 DD45 asteroid circles the sun every 18 months, but its path will not threaten this planet at least for the next century, he said.

The number of "potentially harmful asteroids" discovered each year has grown dramatically over the past decade as "systematic programs" to scan the skies have been put in place, McNaught said. Nearly 100 new ones have been found in each of the past several years, he said.