(CNN) -- A volcano in southern Alaska erupted anew Monday, the fifth eruption since coming back to life Sunday night. 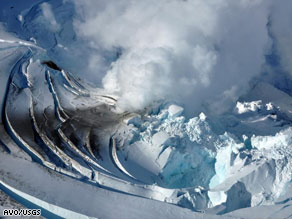 Mount Redoubt vents steam atop the crater in Alaska on Saturday.

The eruptions sent ash columns some 60,000 feet into the air above the snow-covered peak, and several communities west of Anchorage, Alaska, reported falling ash, officials said.

It also raised concern about ash fallout in towns near the volcano.

A "dark and cloudy environment" was noted near Cook Inlet, Salazar said.

Agencies including the Federal Aviation Administration, the National Oceanic and Atmospheric Administration and the U.S. Geological Survey were monitoring the situation.

Concern centers mainly on three areas, Salazar said on a Monday conference call with reporters. The first is the ash clouds' effect on air traffic in the vicinity of the volcano. Aircraft carrying a total of roughly 20,000 passengers fly through the area on any given day, Salazar said.

"I understand a number of commercial flights have been canceled coming in and out of Anchorage International Airport," USGS geophysicist John Power said earlier Monday. "We could see disruptions to air travel to south central Alaska, and Alaska as a whole for a period of weeks to months."

Officials are working with the aviation industry to make sure air traffic in the area is safe, Salazar said.

The second area of concern is for people on the ground near the mountain, he said, but noted that most residents know what precautions to take, as experts have been warning of an eruption for some time.

In Port Alsworth, where about 100 people live year-round, Mark Lang, 56, said that everyone is staying inside.

"Stay indoors and stay out of it as much as you could," he advised.

In the event residents have to go outside, he said, they wear masks.

He said the abrasive ash is dangerous to breathe and "not good for your lungs." It could pose a problem for the town, he said, if it prevents airplanes from flying into Port Alsworth. Flying is the only way to get to the town.

In Anchorage, about 100 miles from the volcano, residents were getting ready for ash.

"All the masks and filters were sold out in two days," said Abi Seaver, 19, of Anchorage.

Another resident of Anchorage said the city isn't too concerned.

The third area of concern regards facilities in the area such as he Drift River Oil Terminal, which Salazar described as a "major terminal" for the storage of crude oil. But he said measures have been taken in anticipation of an eruption, to prevent environmental damage, and "we believe everything is safe there."

Experts expect the eruption to follow the same pattern as the last events in 1989 and 1990. That eruption continued for months as the mountain's lava dome grew then collapsed, raising another ash cloud, said Tom Murray, a scientist at the Alaska Volcano Observatory.

The ash cloud was moving north, missing the bulk of the population in south-central Alaska, Murray said.

"We are continuing to watch the volcano very closely," he said. "We could have several more phases, such as we've seen."

The USGS estimated the height of the eruption cloud at 50,000 feet and warned that mudflows were possible on the Drift and Crescent rivers, and ashfall was likely near and downwind from the volcano.

Ash from the volcano is expected to blow north and pass west of Anchorage, said Dave Schneider, a geophysicist with the Alaska Volcano Observatory. He described the ash as a trace -- meaning if some landed on a windshield, the driver could still see through it.

Power said the ash will be about the thickness of a penny or a dime. He warned residents to take precautions.

"It does pose significant problems for mechanical systems, people with respiratory illnesses and aircraft," he said, adding that residents should be prepared to stay indoors.

Those in range of the ashfall should seal their windows and doors, the National Weather Service said. It also advised that residents protect electronics, minimize driving and cover air intakes and open water supplies.

The alert level went to red, the highest level, when the eruptions began, according to the Alaska Volcano Observatory Web page.

All About Alaska • U.S. Geological Survey