(CNN) -- Secretary of State Hillary Clinton called for tighter controls over tourism and other forms of pollution in Antarctica Monday, arguing for greater global cooperation to help preserve the continent's environmental and scientific research value. 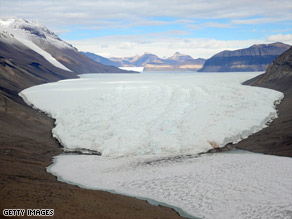 The Dry Valley region of Antarctica has seen an increase in visits by tourists.

Addressing a joint session of the Arctic Council and the Antarctic Treaty Consultative Meeting in Baltimore, Maryland, Clinton said the Obama administration is concerned about the growing popularity of tourism in the southern polar region.

She said the United States is proposing new international limits on the number of landings from tourist vessels, as well as greater cooperation to prevent potentially hazardous discharges from those ships.

At the same time, the United States is proposing new requirements for lifeboats on tourist ships "to make sure they can keep passengers alive until rescue comes," Clinton noted.

Aside from worrying about the environmental impact of tourism, the U.S. is "concerned about the safety of the tourists and the suitability of the ships that make the journey south," she said.

Watch Clinton say how the Antarctic has been protected from war »

The issue of tourism in the Antarctic has become an increasingly divisive issue in recent years, pitting scientists and preservationists against a travel industry seeking to capitalize on a growing demand for adventure and nature-oriented tours.

Over 46,000 tourists visited Antarctica in the 2007-2008 tour season -- almost four times as many visitors as during the 2000-2001 season, according to the International Association of Antarctica Tour Operators.

Clinton's remarks came as the United States helped mark the 50th anniversary of the Antarctic Treaty, a model for "how agreements created for one age can serve the world in another," Clinton said.

Clinton noted that President Obama sent the U.S. Senate an amendment to the treaty Friday that would spell out how the international community should better prevent and respond to environmental emergencies in Antarctica. The amendment would cover the question of liability tied to environmental damage in the ecologically sensitive region.

In addition, the United States has proposed an extension of the treaty's marine pollution rules "in a manner that more accurately reflects the boundaries of the Antarctic ecosystem," she noted.

"The treaty is a blueprint for the kind of international cooperation that will be needed more and more to address the challenges of the 21st century," Clinton said.

"It is an example of smart power at its best: governments coming together around a common interest and citizens, scientists and institutions from different countries joined in scientific collaboration to advance peace and understanding."

Clinton argued that the treaty "and its related instruments remain a key tool in our efforts to address an urgent threat of this time: climate change."

A number of international scientific research stations have been established in Antarctica in part to help explore the probable causes and effects of global warming.

Twelve nations initially signed the Antarctic Treaty in 1959; 47 nations abide by it today. The accord specifies that Antarctic territory cannot be used for military purposes. It bans, among other things, nuclear testing and the disposal of radioactive waste material on the continent.

It also protects freedom for international scientific research in the region.

All About Antarctica • Hillary Clinton