(CNN) -- Alaska's Mount Redoubt towers more than 10,000 feet above sea level, is an active volcano and can send clouds of ash so high that jetliners could be at risk. 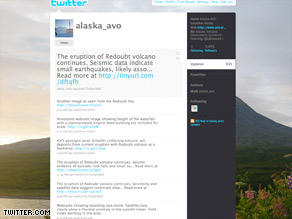 More than 7,000 follow Mount Redoubt by the name of Alaska_avo on the social networking site Twitter.com.

Scientists and employees from the Alaska Volcano Observatory maintain the mountain's page on the social networking site.

They monitor Redoubt for seismic activity and eruptions of ash that potentially could reach Anchorage, Alaska's most populous city about 100 miles away.

While typical entries -- "Seismicity remains elevated. Web cam and satellite views are cloudy. AVO geologists are working in the vicinity of the volcano today collecting tephra deposits" -- don't seem like the kind of titillating postings that would attract an online fan base, the volcano has its cadre of loyal followers.

An Anchorage Daily News article recently christened the mountain "an Internet star" and said Redoubt had the largest following in the state on social networking sites.

"It's good to be reminded sometimes that we are not the only ones who are interested," said Rick Wessels, a geophysicist at the volcano observatory.

Keeping followers up to date on the mountain's activities in 140 characters or less is no small task, researchers said.

Geophysicists, geologists, glaciologists and geochemists keep an eye on what is happening at Redoubt through occasional helicopter trips out to the mountain and through nearby seismic sensors that run off solar power.

Three cameras also provide near-simultaneous pictures of Redoubt. One camera is placed on an oil rig; another is simply known as the "Hut camera."

Redoubt has more than 7,000 followers on Twitter, which may not seem like a lot considering the 1 million-plus followers that Ashton Kutcher and CNN's Breaking News Twitter accounts can boast.

But Ken Woods, part of the observatory Web team that posts updates on the mountain, said Redoubt's fans extend much wider than its Twitter followers.

"I can write about an ash cloud at 50,000 feet," Woods said. "But if I post a really incredible photo of that cloud, the reaction is amazing. People 'retweet it,' and it just goes on and on."

As more governmental organizations see Twitter as a tool for getting their message out, one new media expert predicts a growing "police scanner" effect to take hold of social networking.

"Twitter has allowed regular people to tap into this kind of information," said Jen Reeves, an associate professor at the University of Missouri who teaches journalists about social networking tools. "Before you had to be in a newsroom. Now the whole world can see what that's like."

Reeves said Twitter can lead to great news tips but the information still needs to be verified.

But Craig Mitnick argues that with social networking, sometimes it's not always that easy to know who the source really is.

"It's a bombshell waiting to happen," said Mitnick, a former prosecutor who has created Nixle, a service for government agencies to send information via text messages. "Public safety information needs to be trusted when it's received. On Twitter anyone can be the FBI."

Even a mountain can have its identity "stolen." The Alaska Volcano Observatory's Woods had a scare when people asked him if researchers also had created a Facebook site for Redoubt.

"I was concerned that someone might be sending the wrong information out, that it could be some 15-year-old kid trying to make a name for himself," Woods said.

Then he looked at Redoubt's profile on the Facebook page, which lists the mountain as being a "scientologist" and in an "open relationship."

Apparently there are some things about Redoubt that even the volcano's scientists don't know.