(CNN) -- A new study dispels the widely accepted theory that the Komodo dragon kills by infecting its prey with toxic bacteria. 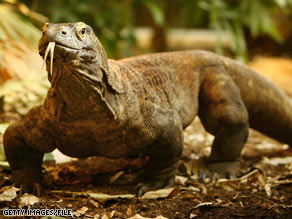 Researchers say the Komodo dragon has venom that keeps blood from clotting around its prey's wounds.

Instead, the world's largest lizard delivers a powerful bite with its serrated teeth and uses a powerful venom to bring down its victims.

Komodo dragons are native to the islands of Indonesia. They can weigh more than 220 pounds (100 kilograms) and grow up to 10 feet (3 meters) in length.

But their bites are not as strong as that of a crocodile, for example. And they cannot hold down their prey. So, researchers wondered, what lay behind the dragons' hunting success?

Until now, scientists thought the dragons infected their prey with bacteria that lurked in the bits of meat stuck between their teeth.

The explanation made sense, because many victims would not immediately fall. They'd wander off and collapse later, allowing the dragon to feast on the corpse at leisure.

The new study upends that theory.

It was conducted by a team of scientists led by Dr. Bryan Fry from the University of Melbourne in Australia.

According to their research, the dragon's bite weakens and immobilizes the prey. It then injects venom from special glands in the mouth.

The theory is consistent with what happens to the prey soon after it's bitten, the scientists said. The prey becomes still and unusually quiet, and it bleeds profusely.

"The combination of this specialized bite and venom seem to minimize the dragon's contact with its prey, and this allows it to take large animals," Fry said in a statement released by the University of Melbourne.

Komodo attacks on humans are rare, but some have been reported.

In March, an Indonesian fisherman was killed when he trespassed on a remote island in search of fruit. A month earlier, a ranger in the same park survived after a Komodo dragon climbed the ladder into his hut and bit his hand and foot.

The latest findings will be published in the next issue of the journal Proceedings of the National Academy of Sciences.

All About University of Melbourne • Indonesia • National Academy of Sciences