(CNN) -- Researchers in the U.S. have proposed a new way of allocating responsibility for carbon emissions they say could solve the impasse between developed and developing countries. 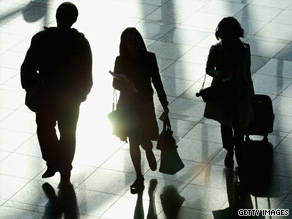 The Princeton researchers estimated that in 2008 half of the world's emissions came from just 700 million people.

The method sets national targets for reducing carbon emissions based on the number of high-income earners in each country, following the theory that people who earn more generate more CO2.

"It's fairer than some other ideas out there in the sense that we attribute responsibility for emission reductions based only on the number of high-emitting people in the country -- if the country has large number of people who are high-emitters then it has more work to do," said Shoibal Chakravarty, a research scholar at Princeton Environmental Institute.

When researchers at Princeton started working on the project two years ago, one of their first aims was to find a reliable way to estimate the average emissions of high-income earners.

"There's actually a very strong relationship in every country between emissions and income," Chakravarty told CNN.

"By and large for every 10 percent increase in income, the emissions from a certain person go up about six to 10 percent. This is true pretty much everywhere in the world."

Researchers based their estimates on decades of data from national statistics offices and the World Bank.

"What happens is that initially people spend their money mostly on direct use like transportation, air conditioning, heating and cooling and so on," Chakravarty said.

"But they also spend a lot of their money on buying goods, and buying stuff. And to make stuff you use energy and you produce emissions."

Their findings were adjusted according to each country's energy efficiency.

"Some countries are better at it than others," Chakravarty explained. "Japan on average is twice as efficient as the U.S. so we took all that into account."

The setting of fair national targets to reduce carbon emissions has been a sticking point in climate negotiations since long before the Kyoto Protocol was adopted in 1997.

Developed nations have been loath to agree to large cuts in carbon emissions without some kind of commitment from developing countries to curtail their rising emissions.

Developing nations argue that richer, developed countries should shoulder the burden of the cuts, given their responsibility for producing the bulk of them in the first place.

To date, of developed countries, Scotland has set the most ambitious reduction targets of a 42 percent cut in the nation's carbon emissions on 1990 levels by 2020. Its contemporaries lag far behind.

The UK has agreed to non-binding cuts of 34 percent on 1990 levels by 2020. The European Union has earmarked a cut of 20 percent compared to the same year.

In the U.S., the House of Representatives recently passed the U.S. Clean Energy and Security Act, which includes a commitment to cut carbon emissions by 17 percent on 2005 levels by 2020. The figure was cut from 20 percent in order to gain approval, and there are fears it could be watered down even more before it becomes law.

The method developed at Princeton proposes allocating cuts on a sliding scale on the basis of wealth.

For a time, poorer countries would be absolved from cutting carbon emissions on the grounds that they need to burn fossil fuels to alleviate poverty.

As poorer countries grow wealthier, their share of emissions cuts would gradually increase so that by the time they came to cutting emissions, they would have the resources to do so, or so the theory goes.

"Dealing with emissions of the very poor is not contradictory with dealing with climate change," said Chakravarty, who was one of the report's lead authors

"As you move forward in time, more and more of the job goes to the developing world because they're getting richer faster," Chakravarty explained. "They're growing at twice to three times the pace of the developed world. So in 20 to 30 years from now they would have a much higher proportion of the carbon emissions."

A hypothetical scenario in the report controversially absolves China, currently the world's largest emitter of carbon emissions, from making cuts to C02 for the next decade. The scenario assumes that the world agrees to take action to cut global emissions from 2010, so that levels of carbon emissions in 2030 are similar to now.

"China actually does not have that many high emitters so China actually gets a breathing space for another 10 years or so. It's only then that China has to start reducing," Chakravarty said.

"Some other parts of the world which you might not consider developing, like the Middle East or Russia -- they would also have a fair bit of work too do because their emissions are also pretty high per person."

According to the scenario, the U.S., Canada and Australia would also "have more work to do" than Europe.

The report doesn't presume to tell countries how they should go about encouraging, or forcing, their highest emitters to reduce their emissions. It merely sets out another way to allocate cuts on a national basis.

The report's authors include Stephen Pacala and Robert Socolow, whose concept of "stabilization wedges" was featured in Al Gore's 2006 climate change film, "An Inconvenient Truth."

They maintained that a strategy of "stabilization wedges" would help stop global emissions rising over the next five decades.

Robert Socolow, a professor of mechanical and aerospace engineering, said the new method of national caps proposed by the Princeton researchers hadn't been suggested by diplomats because "U.N. rules and customs make it difficult for the international community to examine what is going on inside countries."

He added: "Over the next several decades, global environmental rulemaking will need new wisdom to accommodate developing countries whose per capita data belie the presence of both large populations of the very poor and upper and middle classes that are major consumers of resources. Our proposal is a start down this road."

Whether policymakers and climate change campaigners will take up the proposal outlined in the Princeton paper remains to be seen.

Its authors hope that at the very least their method will "enrich the search for fair and uniform allocation rules" in a post-Kyoto agreement.

Leaders from developed and developing nations will meet in Copenhagen in December with the aim of forging a deal to replace the Kyoto agreement, which expires at the end of 2012.

"To what extent it's actually going to make a difference in Copenhagen, that's difficult to say," conceded Chakravarty. "If people find it interesting and there's still time, then it could make a difference, but we don't know."