(CNN) -- The first human trials of a swine flu vaccine are expected to start in Australia Wednesday, as the World Health Organization confirmed that more than 700 people had died from the virus worldwide. 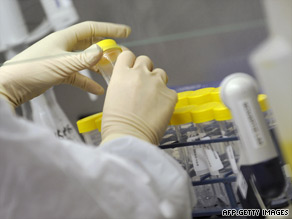 A scientist examines samples from suspected swine flu patients at a WHO laboratory in Melbourne, Australia.

The test will be conducted on healthy adults between the ages of 18-64. Participants will receive two shots three weeks apart and will undergo blood tests to determine if they are generating an appropriate immune response to the virus, the company said.

"We appreciate that new influenza strains like the 'swine flu' can surprise us with properties that mean they might require higher dosing and two injections rather than one to provoke the desired level of immune response in humans," said Dr. Russell Basser, global director of clinical development for CSL.

The World Health Organization revealed Tuesday that more than 700 people had died after contracting the virus, 260 more than the latest death toll, released July 6. The jump in the death toll is due simply to the two-week gap in reporting cases, a WHO spokeswoman explained.

Because there are so many cases emerging so quickly, the WHO changed its reporting guidelines last week. It decided to stop giving a tally of cases and focus instead on identifying unusual patterns. The counting of all cases is no longer essential because it is exhausting countries' resources, the organization said Monday, commenting on the policy change.

While the virus is spreading quickly, the WHO offered some reassurance to those concerned about the disease. It said the virus has so far been characterized by mild symptoms in most patients, who usually recover -- even without medical treatment -- within a week of developing symptoms.

Meanwhile, a group of British children and teachers quarantined for almost one week in a Beijing hotel because of swine flu fears have been allowed to leave their hotel.

A spokesman from Britain's Foreign Office could not confirm the number of children and teachers released from quarantine, but said they were among a group of 111 that was sequestered in a Beijing hotel six days ago.

WHO declared H1N1 a global pandemic on June 11. More than 120 countries have reported cases of human infection since the virus was first identified in Mexico in April. There are more than 98,000 documented cases worldwide