(CNN) -- Over 350 new species including the world's smallest deer, a "flying frog" and a 100 million-year old gecko have been discovered in the Eastern Himalayas, a biological treasure trove now threatened by climate change. 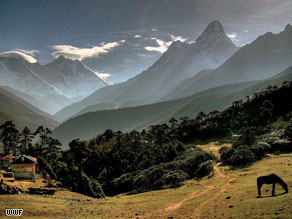 The region studied covers a vast expanse of the mountain region.

A decade of research carried out by scientists for the WWF in remote mountain areas brought discoveries such as a bright green frog that uses its red and long webbed feet to glide in the air.

The WWF report, "The Eastern Himalayas -- Where Worlds Collide," details discoveries made by scientists from various organizations between 1998 and 2008 in a region reaching across Bhutan and northeast India to the far north of Myanmar as well as Nepal and southern parts of Tibet in China.

"The good news of this explosion in species discoveries is tempered by the increasing threats to the Himalayas' cultural and biological diversity," Jon Miceler, Director of WWF's Eastern Himalayas Program, said in a press statement.

"This rugged and remarkable landscape is already seeing direct, measurable impacts from climate change and risks being lost forever."

One of the most significant findings was not exactly "new" in the classic sense. A 100-million year-old gecko, the oldest fossil gecko species known to science, was discovered in an amber mine in the Hukawng Valley in the northern Myanmar.

The report mentions the miniature muntjac, also called the "leaf deer," which is the world's oldest and smallest deer species. Scientists initially believed the small creature found in the world's largest mountain range was a juvenile of another species but DNA tests confirmed it was a new species.

The Eastern Himalayas harbor a staggering 10,000 plant species, 300 mammal species, 977 bird species, 176 reptiles, 105 amphibians and 269 types of freshwater fish. The region also has the highest density of Bengal tigers in the world and is the last bastion of the charismatic greater one-horned rhino.

Historically, the rugged and largely inaccessible landscape of the Eastern Himalayas has made biological surveys in the region extremely difficult. As a result, wildlife has remained poorly surveyed and there are large areas that are still biologically unexplored.