(CNN) -- You're probably not thinking about what you would like for Christmas yet. But ask any environmentalist for their ideal gift and you'll get a version of this answer: a binding agreement at the UN Climate Change Conference in Copenhagen this December that is strong enough to match the science. 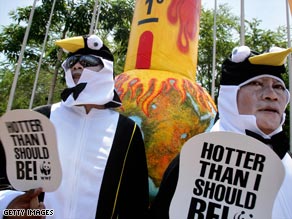 Environmental activism keeps the heat on the UN to deliver at climate talks in December.

The talks are the latest in a line of climate conferences that began in Rio de Janeiro in 1992. This year the focus will be on the details of a new global climate agreement for when the Kyoto Protocol expires in 2012.

The stakes are high.

The representatives of 192 national governments, along with countless lobbyists and special interest groups, will gather between 7-18 December against a backdrop of increasingly gloomy academic papers, all predicting dramatic and catastrophic changes to the world -- unless we act right now.

"The issues at stake are greater than any decisions made in human history," Tom Picken of Friends of the Earth International told CNN. "With unprecedented consequences for the ecosystems of the planet, the well-being of all humanity, the very survival of hundreds of millions, if not billions of people, and the ability of future generations to have and enjoy life on Earth."

According to Kofi Annan's Global Humanitarian Forum, there are already more than 300,000 deaths per year directly attributable to climate change. While hundreds of studies around the world have linked climate change to phenomena including the increased frequency and intensity of hurricanes and other storms, changing rainfall patterns, drought, coastal flooding, changing disease patterns and the migration of human populations.

As a result climate change is no longer just a "green" issue, with organizations now campaigning for action also including trade unions, humanitarian NGOs such as Oxfam, Christian Aid and the Red Cross; even civil groups, like the Women's Institute in the UK, are demanding action.

But, despite this broadening of the issue and what most experts argue is unequivocal scientific proof that we need to act immediately to avoid even more serious consequences, so far activists agree that the necessary changes aren't coming nearly fast enough.

"The political and economic responses to climate change so far are simply tinkering at the edges of what's needed in relation to what's at stake," says Picken.

"Climate science is becoming increasingly clear and [it is] widely agreed that we are on the verge of passing irreversible tipping points, whereby although catastrophic impacts might not be evident for some decades, delay in the atmospheric system could mean a point of no return is passed imminently.

"The best available science indicates we are now at that juncture... This means that political and economic decisions made in Copenhagen are vital if we are to have any reasonable chance of avoiding these tipping points."

On some levels there is no doubt progress has been made. Climate change is now part of the popular lexicon and an important political issue. However, the gulf between what is being done to address the problem, and what pressure groups argue needs to be done is growing wider.

With the clock ticking, Friends of the Earth believe that now is the time for radical change: "What we need to see in Copenhagen is genuine shifts toward making the cuts [in emissions] needed in developed countries, the commitment to the finance needed to support developing countries, and perhaps most of all, an abandonment of failed policies -- or false solutions.

"This boils down to ensuring [industrialized] countries commit to making at least 40 percent cuts by 2020 without recourse to offsetting within this range, mobilize the necessary international finance to support mitigation in developing countries and protect forests without using offset mechanisms to buy up tracks of rainforest at the expense of making real industrial emissions cuts at home."

Watch how Japan is struggling to meet its emissions targets »

These are bold demands that will equate to major changes in many aspects of society and business -- with some vested interests obviously reticent to accept them. But Picken believes that acting now will have benefits for our economies as well as our environment.

"[Addressing] climate change could still cost only one to three percent of global Gross Domestic Products now," he says.

"If delayed, our response bill could rise to more than 20 percent of GDP -- there is no alternative. Besides, new investment into real climate solutions, ambitious public investment in renewable energy technology and reducing energy waste will create exciting new business opportunities and tens of thousands of green collar jobs, as well as protect families and businesses from the yo-yoing costs of fossil fuels."

Hearing that mitigating what both Oxfam and the Red Cross have dubbed "the greatest threat to humanity" may also impact positively on our society and economy must be encouraging. But it is still unclear whether our leaders will accept the environmentalists' vision at Copenhagen.

"It's too early to call," says Picken. "Real change can and must happen, but entrenched vested interests must be excluded to avoid such events turning into talking shops.

"We can expect a combination of a reasonable agreement that moves things in the right direction, but needs much further detail and commitment; a face-saving statement with little substance, essentially stalled negotiations; and an agreement that looks like it addresses the challenges, but is actually based on false-solutions."

Any outcome will of course be versed in the dry language of international legalese. But for inspiration Picken believes we should be looking to some of the most inspirational moments in human history for a glimpse at what our species can achieve.

"We must look not only to past negotiations, but to historic moments that changed the course of history. We must grasp the achievements of abolishing slavery and putting a man on the moon, to remind ourselves what we really could achieve.

"Now is not the time to be cynical -- there is no acceptable alternative to solving climate change. What it clear however is that we cannot solve this problem using the same thinking and systems that caused it.

"[Sir Nicholas] Stern has famously stated that climate change is the greatest failure of the market in history. We must be careful not to fight fire with fire, but instead mobilize the diversity of solutions at our disposal, and dispense with false solutions that detract from this effort.

"This path must of course be grounded in striving for sustainable societies, through a fair allocation of the worlds resources, respecting and valuing the rights of people now and in the future, and supporting the solutions to climate change that we are responsible for achieving for the benefit of all."

The rhetoric is high, but then so are the stakes. The lives and livelihoods of millions will be on the table in Copenhagen -- and so to will our species' ability to imagine a better, fairer future.

All About Global Climate Change • Nature and the Environment • United Nations