Documentary looks at plight of the honeybee 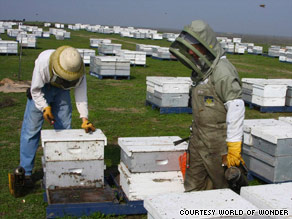 A scene from "The Last Beekeeper," premiering this weekend on the Planet Green cable channel.

You may find yourself rescuing a tiny bee you see struggling in a puddle of water. Instead of fearing its sting, you may think about the role honeybees play in putting food on your table.

The documentary, which premieres Saturday on the cable channel Planet Green, explores the "intimate relationship" between humans and bees through the eyes of three struggling American beekeepers.

"You suddenly realize that even though they look like insects, when you really look at them they take on these personalities," said producer Fenton Bailey.

Apiarists -- the professional title for bee scientists -- estimate that one out of every three bites of food you eat is directly or indirectly pollinated by honeybees.

Alarming headlines two years ago about the mysterious disappearance of honeybees prompted filmmakers to follow beekeepers from South Carolina, Montana, and Washington as they traveled with their colonies to pollinate California's massive almond crop.

Director Jeremy Simmons said they wanted to show "more than what was in the paper" about the mystery.

"There is a really powerful connection between a human being and a bee because we've tended bees for thousand of years," Bailey said. "It's such an old tradition and bees are incredibly sophisticated, evolved creatures."

The cameras rolled as these beekeepers faced "colony collapse disorder," a still unexplained phenomenon which scientists estimate has wiped out almost a third of the domestic honeybee hives in the United States.

Nomadic beekeepers truck their bee colonies across the country, following the pollination seasons for almonds, apples, cotton and other crops dependent on their insects.

Nicole Ulibarri, who inherited her father's Montana beekeeping business last year, said it's a roller coaster ride for both the bees and the beekeepers.

"You can have a high this month and all of the sudden you can run into something, and the bees start starving to death," Ulibarri said.

Bees are loaded on trucks in January for a cross-country ride to California to pollinate almonds for a few weeks. Their next stop may be Washington state apple orchards for the spring pollination. The changes interrupt their natural rhythms, Ulibarri said.

"It's like putting you on a strict diet and that's all I feed you for the next month," she said. "And I pick you up and I shake your house and I take you down the road, which is pretty stressful, and then I move you to a new location, and, guess what, for the next six weeks, now, I've changed your temperature and now I'm only going to give you watermelon. You get sick."

The travel also exposes the bees to a variety of pesticides, adding to their stress, she said. And mites, believed to have been brought in by bees that were imported to replace lost hives, are also a problem, she said.

The film does not offer an answer to what's killing the honeybees. But Ulibarri said researchers are "getting real close" to identifying a virus as the main culprit.

In one poignant moment in the documentary, the cameras capture one of the beekeepers breaking down in tears after lying to his wife to hide the fact that he lost most of his bees.

"It's a tragedy, that silent moment in the bee yard when you realize you are surrounded by death," Simmons said. "It's a very powerful, very sad moment."

Along with the loss of their livestock, American beekeepers face tough competition from less expensive imported honey -- especially from China and Argentina, Ulibarri said.

She planned to sell her bees after last year's disappointing year, but the prices being offered for them was "literally nothing." But this year has been better, with fewer lost colonies, she said.

"Bees really become a part of us, we learn so much all the time," she said. "One really neat thing, when you're around enough hives, as soon as you open it, you can hear from the energy of the hive how they are doing. They are the voice of mother nature."

All About Environmental Science • Documentary Films