(CNN) -- A pint-sized version of the Tyrannosaurus rex, with similarly powerful legs, razor-sharp teeth and tiny arms, roamed China some 125 million years ago, said scientists who remain startled by the discovery. 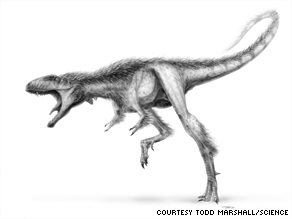 An adult Raptorex was about 9 feet tall and weighed about 150 pounds, scientists say.

The predator, nicknamed Raptorex, lived about 60 million years before the T. rex and was slightly larger than the human male, scientists said.

The findings, to be released Friday in the journal Science, are based on fossilized remains discovered in lake beds in northeastern China. They show a dinosaur with many of the specialized physical features of Tyrannosaurus rex at a fraction of its size.

"The most interesting and important thing about this new fossil is that It is completely unexpected," said Stephen Brusatte, co-author of the article, in a conference call with reporters.

"It's becoming harder and harder to find fossils like this that totally throw us for a curve," added Brusatte, a paleontologist with the American Museum of Natural History.

Scientists who have studied the fossilized animal, which was 5 to 6 years old when it died, believe it was an ancestor of the fearsome T. Rex.

"Raptorex really is a pivotal moment in the history of the group where most of the biological meaningful features about Tyrannosaurs came into being," said lead author Paul Sereno, a paleontologist at the University of Chicago.

"And the surprising fact is that they came into being in such a small animal," he added.

Based on estimates of other similar-sized theropods, or "beast-footed" dinosaurs, Sereno and his colleagues estimate an adult Raptorex was about 9 feet tall and weighed about 143 pounds.

By contrast, the Tyrannosaurus rex, which topped the prehistoric food chain until dinosaurs went extinct about 65 million years ago, was believed to weigh at least five tons.

Scientists hypothesize that Raptorex ran its prey down, using its enlarged skull, powerful jaws and sharp teeth to dispatch animals much larger than itself. Like the T. rex, the Raptorex also had tiny forelimbs, they said.

"We can say that these features did not evolve as a consequence of large body size but rather evolved as an efficient set of predatory weapons in an animal that was 1/100th the size of Tyrannosaurus rex and that lived 60 million years before Tyrannosaurus rex," Brusatte said.

After the remains were discovered, they were smuggled out of China and into the United States, where they were eventually purchased by a Massachusetts collector, Henry Kriegstein, who donated them to science. Sereno was later asked to identify the fossil.

"I hope that this is a pathway that other important specimens that do find their way out of the ground in the dark of night do not get lost to science," Sereno said.

The Raptorex fossil will eventually be returned to China, where it will be put on display near the excavation site, scientists said.

All About Paleontology • China