Austin, TEXAS (CNN) -- Pliny Fisk III has been called a "mad scientist," a "dreamer" and a "visionary." His favorite word to describe the architectural work he does is "crazy." 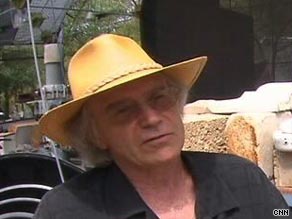 Pliny Fisk hopes his ideas like the "megacrete" will revolutionze how office buildings are built.

Spending a day with Fisk on his 18-acre work site outside of Austin, Texas is like riding a rocket blast into the future.

"To be free to do what we're doing is absolute magic," Fisk recently told CNN.

Running around his architectural compound are some 10 interns, from around the world, always carrying out experiments.

Fisk's mission is to develop environmentally-sustainable building materials and to fundamentally change the way we build our communities, like homes and office buildings.

Early in his career, Fisk might have appeared like a wacky wizard working in a secret laboratory in the Texas Hill country mesquite brush. But not anymore. Fisk is now considered to be on the cutting edge.

On the day we visit Fisk he's about to launch the first prototype test of his latest invention -- an environmentally friendly cement and building structure. Fisk hopes these new ideas will revolutionize how homes and office buildings are built and how communities are planned and organized.

The cement will be called "megacrete." Fisk says it will be made of magnesium oxide and phosphate from brine, which is a by-product of petroleum and water treatment facilities.

If that doesn't make sense, Fisk makes it sound simple. He likes to say he's just taking waste and making buildings out of it.

The cement will hold together building modules that are essentially self-contained structures created from local and regional building materials.

That means we have to change where and how we get our building materials and cutting down on the distance those materials are transported.

"We've become very hard core unadaptable and so we expect nature to follow us," Fisk said. "We're always striving to get to that point where we become as adaptable as nature is."

Pliny Fisk lives what he preaches. He and his wife live where they work. Their water source is "off the city's grid." They capture rain water to drink and water their landscape.

And his wife, Gail Vittori, is Fisk's philosophical soul mate. She was his student before they married. Vittori is now co-director of the CMPB and is also on the Board of Directors of the U.S. Green Business Council.

"We need people who stretch what is possible, stretch a way of thinking," Vittori told CNN. "We're using our resources in a way that's completely disconnected from reality."

Pliny Fisk III is a futuristic architect leading the march.