Defriending can bruise your 'digital ego' 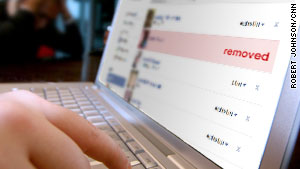 Have you been defriended on Facebook? Experts say our reaction to rejection online is similar to how we feel in person.
STORY HIGHLIGHTS
RELATED TOPICS

(CNN) -- If you harbor a bit of angst over Facebook friend requests gone unanswered, a surprise "defriending" or being deserted by your Twitter followers, you're not alone.

Elaine Fogel has amassed more than 500 connections on LinkedIn, a professional networking Web site, by extending invites to those who appear to fit her wide array of career interests.

But then came "this one woman" who Fogel encountered on one of the 40-plus discussion groups she belongs to on LinkedIn. The woman offered interesting opinions, so Fogel sent her an invitation to join her network.

"She sent an e-mail saying, 'I only connect with people I know, and hopefully our paths will cross one day,' " said Fogel, of Phoenix, Arizona, her voice still carrying notes of disbelief. "I read that, and I said, 'Oh, my God, I've been rejected.' "

Fogel echoes other users who have felt the twinge of hurt and surprise from social media rejection. Some may think hers is an overreaction -- it happened online, with a woman she didn't know -- but recent research shows that our "digital egos" can bruise as easily as we do in person. In fact, rejection online may have the potential to sting even more.

"People tend to think that these relationships are trivial and not very deep, but this is what we're moving towards, having a lot of our communications play out over the Internet," Purdue University social psychologist Kip Williams said. "That's the way it's becoming; this is how we interpret our worth. People care how many [online] friends they have."

Or, increasingly, how many Twitter followers they have. This year, a third-party service launched Qwitter, which allows Twitter users to determine who's stopped following them and which tweet may have turned them off.

Experts say rejection on social networks can hurt worse than an in-person snub because people are usually more polite face-to-face than they are online.

"I think the thing that is often clearly worse online is when it's relatively anonymous, and people use that as a cover and are more cruel than they would be otherwise," said Jean Twenge, a University of San Diego psychologist who has studied the way social networking affects personality development.

Online rejection also doesn't lessen the physical reaction we have to emotional pain.

"If you put a red-hot poker on your arm, one part of your brain says, 'This pain is on your arm,' and the other part says, 'Ow, that hurts' and is less concerned with where it is and more concerned about the emotional meaning of it," he said. "That [second] part also seems to be activated when someone's left out or excluded and rejected."

To Way's surprise, that neurological reaction holds true even when the rejection comes in a digital form, lacking the real-world body language, vocal intonations and other aspects that can influence the way rejection is perceived and felt.

"If you'd asked me a few years ago if you'd get the same effect online as you would in person, I'd say no way," Way said. "I thought doing something in person would have stronger effects than doing something online, but interesting data has come out in the last few years that show mental representations are just as powerful as the real thing."

These data include Williams' "cyberball" studies, which ask a participant to play a virtual ball-tossing game with two other icons. In one study group, the participant plays the game for the entire six minutes, but in the second group, he or she is included for only a fraction of that time and then ignored. The second group reports feelings of anger and lower levels of self-esteem.

Whether participants believe they're playing with humans doesn't appear to affect their feelings of rejection.

"Even when people get rejected by the computer, they feel bad," Twenge said.

Kenneth Loflin, a student who participated in Williams' study, got so frustrated by his fellow players that he gave the computer screen an offensive gesture.

The study also affected the way Loflin interacts online. Out of the 1,200 friends he has on Facebook, 400 of them he doesn't really know, many of them being friends of friends.

"I thought about defriending them, but I didn't want them to feel how I felt" during the "cyberball" game, Loflin said.

By contrast, Bruce Hammond doesn't have a problem giving the rejection slip to Facebook hangers-on.

"For the most part, the people that I'm defriending are the people that I don't have a relationship with: the people I haven't talked to in 15 years," said Hammond, 30, of Chicago, Illinois. "I don't let someone know if I'm going to defriend them. I just do it."

Similarly, Hammond doesn't expect any of his Facebook contacts to let him know before giving him the ax. If someone rejected him in real life, he would ask why the person felt that way, but when the relationship is online, his thinking changes.

"If I come on [Facebook] tomorrow and see I have 425 friends instead of 426, I'm not going to go through my list and see who did it and be upset with them," he said.

Cecilia Sepp, a Washington, D.C.-area consultant, said she avoids the issue entirely by limiting her online network to about 100 friends.

"I don't have a problem with defriending because I don't accumulate [enough] to have a high number," Sepp said.

"When I first heard that defriending was beginning on social networks, it was through a blog post by someone who was shocked that this person had defriended them because they didn't understand why," she said. "The person wanted to know had they done something, had they said something, should they ask, 'What did [I] do?' "

Sepp believes that online "defrienders" should extend the courtesy that Fogel's LinkedIn rejecter gave her: an e-mail explanation.

"You have no facial expression online; you have no tone of voice online; it's very easy to misinterpret phrasing in an e-mail. You have to be very careful about your wording and be more explicit with people when you're making or removing connections," Sepp said. "That's why it's so important to connect with people that you actually know."